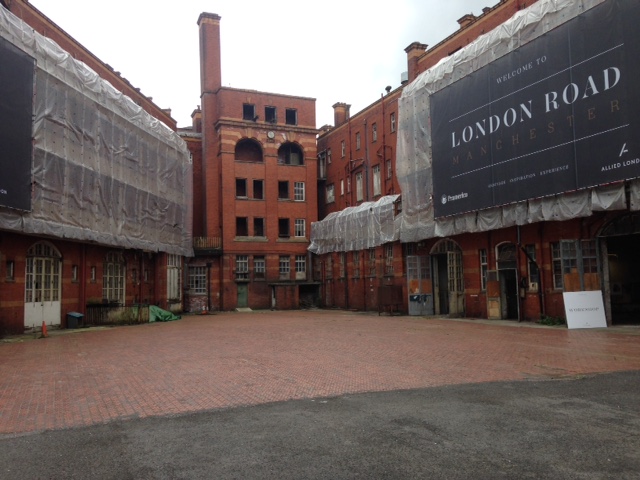 George William Parker’s most magnificent,well appointed fire station described as the finest in the world lies empty, its workshops, stables, control rooms crumble.Its balconies which once contained apartments for 32 fireman lay ruined,the echoes of the gymnasium,laundry,children’s play area and billiard room faded into the distant past whilst a hotel group, the city council and English heritage did battle and the people who care for our heritage mobilise their forces.

On the outside, its tawny Burmantoft’s terracotta brick decorated with classical figures and coats of arms look out over Piccadilly station.Its domes,gables,window arches and downspouts all adorned in the words of Bob Bonner from Greater Manchester’s fire museum,”splendidly unnecessary sculpture and artwork” .

Completed in 1906 amid claims of over extravagance which were strongly refuted by the mayor who declared it money well spent,its decline began with local government reorganisation in 1974 as services were moved to the outskirts,workshops to Worsley,the control room to Agecroft,the flats vacated.

It took its last call in 1986 and the latest and thr unfinished saga began, a battle between the forces of commerce, government and heritage.

Developers Allied London appear to have finally come to its rescue with plans for hotels, swimming pools, arts spaces and restaurants.But before they get to work, the public have a chance over the summer to see the inside and About Manchester got a sneak preview.

There was a story says Guide Jonathan Schofield that the Coroner’s court that also occupied this building was haunted. The figure of a grossly disfigured child would appear in the doorway only to vanish into the mists of time.

The court only closed in 1998 yet to enter the building with its dust covered wooden railings gives the feel of a much more distant almost Dickensian age, there were 932 inquests in its first year and Jonathan will no doubt have all the ghostly facts of suicides, drownings and burnings at his fingertips by the time the tours start this weekend. 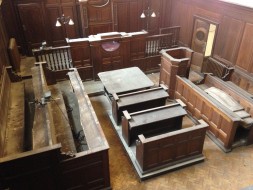 But to the building itself, the legacy, Schofield tells us of a city feeling mighty at the beginning of the 20th century. And mighty it felt, it cost the equivalent of £20m in today’s money and it could have been more, the grand facade on London Road was to have a horse and chariot but it was shelved by the corporation worried that too much money had already been spent.

We tour firstly the outside, the walk detailing what an impressive building this was.On Fairfield Street, seven main entrances where the fire engines came out, a bell would notify people outside that the engines were coming out , a policeman on duty outside would stop the traffic.

When we step inside, the magnificence of the courtyard takes precedence. Once we are told, a bustling constant hive of activity, training exercises, cleaning of machines, hoses draped from the main tower to dry out, decorated at Xmas carols would be sung, the building housed a social club, Jonathan tells  that even up to the 1960’s drink was allowed on duty.

The magnificent engine sheds, when opened the engines were drawn by horses, Seven engines could be kept here, above was the fireman’s  acccomodation, when the alarm sounded they would slide down the pole and the horses would whisk the engines away.

Their first call out was a false alarm,  during  the opening ceremony, The Mayor deliberately set up a test, seeing how quickly they could get to an imagined fire at the Town Hall.

This is a fascinating place, the tours are selling out quickly so get your spot before the end of August,