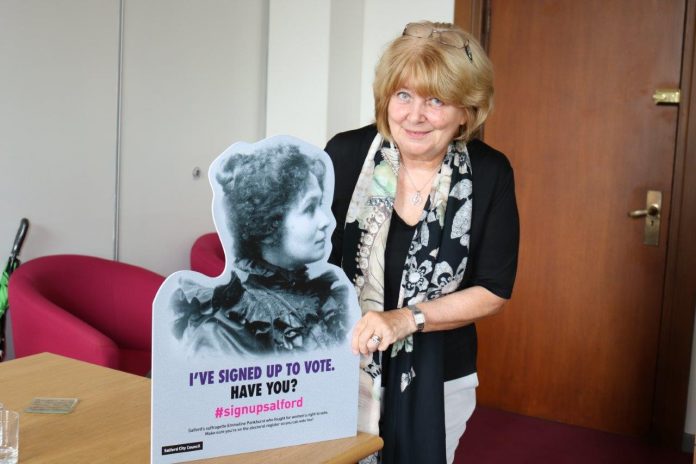 Salford’s famous suffragette has joined another campaign about voting – this time to get people in Salford registered for next year’s elections.

It’s part of Salford City Council’s annual drive to update the electoral register. It has has just sent out 120,000 letters to every home in the city. Only people who are listed on the register can vote so people are being asked to check and confirm their details.

“It’s 90 years this year since women and men got equal voting rights after a long and very difficult campaign by both Lancashire mill workers and Mrs Pankhurst and her Women’s Political and Social Union,” she said.

“We don’t want anyone to miss their chance to have their say when it comes to elections and to pick the candidates they think will do the best for them and their city and we thought Emmeline would fully support that if she were still with us.

“It’s not often you get a chance to take a selfie with one of the most famous women in history so we’re hoping people will return the form and enjoy the opportunity.”

Restrictions lifted across Bolton,Stockport and Trafford