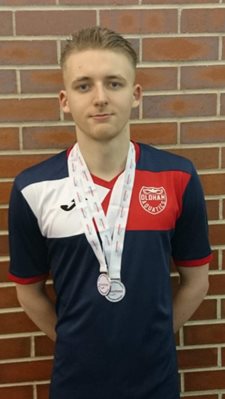 A swimming champion from Tameside is coaching the next generation of stars to success.

Aidan Tevlin won this year’s Greater Manchester Sports Awards in the Workforce Advocate Category, which recognises an individual that has used physical activity or sport within their professional role to have positive impacts.

Aidan said: “It’s an honour. I couldn’t have done this if it wasn’t for the kids who are swimming their heart out for me and the team around me, including family, friends, colleagues and coaches.”

Tameside Council Leader Councillor Brenda Warrington said: “Congratulations to Aidan on a wonderful achievement. He thoroughly deserves this award for the positive impact he’s had in both his work and volunteering.

“We’re extremely proud of Aidan and all those who represented Tameside at the Greater Manchester Sports Awards.”

Aidan’s love of swimming has seen it become a central part of his life and he is a great advocate for the sport.

He said: “It’s the best sport for health and fitness as it works the entire body, pushing against the water’s resistance. And it gives you lifesaving skills, there’s no other sport that can save your life like swimming. I want to revolutionise the sport and make it a top sport.”

The swimming teacher works for Active Tameside and also volunteers as a coach for several different clubs around Tameside, in particular his main club Ashton, and even further afield when required.

With his help, his club now have twice as many swimmers competing in category two swims and some competing for their county. He encourages swimmers to better themselves, organises community events, helps to increase participation and will soon be training others to become swimming teachers.

He’s been the Masters Cheshire and Lancashire champion and was second in this year’s South Yorkshire event for 50m backstroke, and has competed at Masters National level, taking third place with the medley relay team.

Aidan’s been a competitive swimmer from the age of ten and helping swimming clubs since he was 13. He initially took swimming lessons for safety and, surprisingly, wasn’t a natural, taking a couple of years to get into it. But when he saw an older swimmer racing he decided that was what he wanted to be like.

He added: “It’s that competitive edge that I have. There’s no feeling like it when you hit a personal best, it’s like a weight has been lifted, a massive joy. When coaching, I’m happy for the kid as they’re achieving something and I’m proud of them for that. My swimmers are always pushing themselves to win, but respectful of others.”