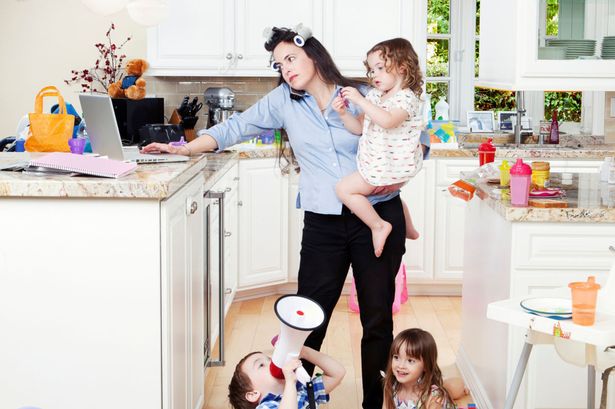 Almost half the nation’s working mums don’t feel their emotional or physical needs are being catered for by their employers, a study revealed.

The worrying statistic emerged from a report which also found one in three fear they would not have the total support of their bosses if they planned to extend their family.

Furthermore, 52 per cent said their employer had not been ‘considerate’ during discussions over the possibility of working fewer hours to more effectively balance work and family life.

The report also revealed more than one in four women went back to work after having a baby because they are the main breadwinner.

Four out of ten opted to return for financial reasons while one in ten said they were keen to get back to the world of work because their career was important to them.

Alarmingly, more than half polled said they still felt women were discriminated against when it comes to promotion prospects and pay rises after becoming a mum.

The study was carried out among 1,000 working women by The Mummy MOT, which provides special postnatal physical examinations for new mums.

Founder Maria Elliott said: “The burden on working mothers is very real and most women I see don’t feel their emotional and physical well-being is a priority of their employer, which is an issue.

“It’s so important for working mothers to feel like they are supported and are not a burden.

“Most women who come to see me for treatment don’t want to talk to their employer about any issues they are suffering and some even avoid going back to work.”

Elliott is calling on employers to be sensitive to potential medical issues female staff may have had during childbirth that could affect their ability to carry out their day- to-day tasks.

And she added: ‘’Physical issues during childbirth can also lead to mental health issues which can impact heavily on their confidence.”

Amid the study, mums were asked to explain how their needs weren’t met.

Among the replies was a mum who feels she is always given what she called ‘the needs of the business speech’ when discussing fitting her family in around work.

Another said she is always forced to take time off as annual leave when her child is sick, instead of exercising her right to take leave to look after a sick dependant.

One respondent claimed she was forced to travel for work not long after returning following the birth of having triplets, hugely complicating her childcare arrangements.

Not being able to find anywhere private to express breast milk was mentioned by another new mum.

It also emerged another challenge for mums returning to work is the issue of discussing health issues with their line manager with one in five feeling too uncomfortable to do so.

The study also found 40 per cent of working mums felt their job had become more stressful since returning from maternity leave.

And 16 per cent said postnatal health issues affected their performance at work.

The results of the study show the UK is still a long way behind other developed countries in providing satisfactory support and opportunities for working mums.

Statistics show 84 per cent of women become pregnant during their lifetimes meaning they are likely to fall pregnant at pivotal times during their career.

Workplace discrimination provides a frustrating double whammy for UK mums who are hit by some of the highest childcare bills in the world.

Researchers also probed the topic of flexible working for mums who want to return to work, but not necessarily in the office.

Overall 75 per cent of women would like to see employers offer flexible or compressed hours, and an option to work from home.

Almost four in ten said that given the choice, they would prefer to work from home.

When asked what their employers could do better 35 per cent expressed a desire for the company to create an on-site creche.

Almost half of the women surveyed felt maternity pay should be higher.

The study also found one in three women has taken their career down a ‘different route’ since becoming a mum.

Elliott, who is a global expert in pelvic pain and postnatal physiotherapies, added: “Some of my patients have suffered traumatic births and are left with life-changing injuries.

“Naturally, this is going to have a massive impact on their personal and professional life too.

“Communication is vital both at home and the office as relationships will suffer otherwise.”

She argued that unless employers had a sound business reason for having specific working hours, firms should introduce flexibility to every job.

She said: “At the moment, too many women are reluctantly dropping out of work or going part-time after having children because their employers won’t allow them flexibility.”

Anna Whitehouse, founder of Flex Appeal, and who is known on social media as Mother Pukka, has been campaigning on this issue for five years after her own flexible working request was refused by her employer.

The mother-of-two, author and blogger, said: “I want to open employers’ eyes that there are humans driving their business, and retaining staff would be far easier if people were better able to balance their work and family lives.”

Social haunting-Working with communities haunted by the past

A new pooch podcast has been launched in a bid to help lonely dogs...