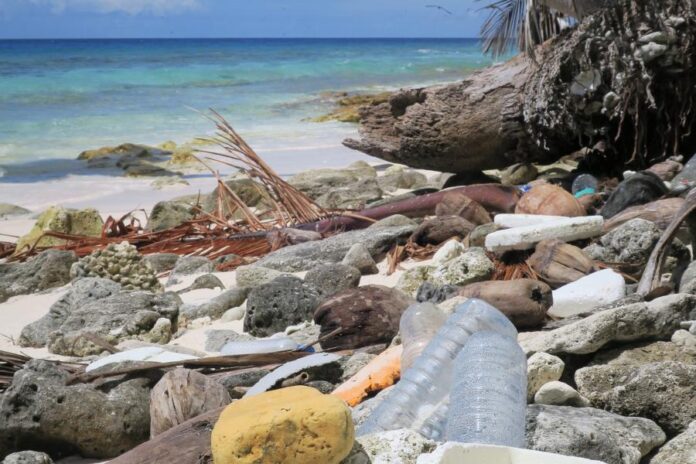 Researchers have revealed a fundamental links between the global climate crisis and plastic pollution, including extreme weather worsening the distribution of microplastics into pristine and remote areas.

The ocean, its ecosystems and species are commonly the focus of plastic pollution research or climate change research; however, the compounding impact of how they act together is often overlooked.

In a paper published today in Science of the Total Environment, an interdisciplinary team of scientists from the ZSL (Zoological Society London) and Bangor University have for the first time, collated evidence that the global issues of marine plastic pollution and climate change exacerbate one another, creating a dangerous cycle, and are urging governments and policy makers to tackle the two issues in unison.

The team identified three significant ways that the climate crisis and plastic pollution – a significant driver of marine biodiversity loss – are connected, with the first being how plastic contributes to global greenhouse gases (GHGs) throughout its life cycle, from production through to disposal. The second demonstrates how extreme weather, like floods and typhoons associated with climate change will disperse and worsen plastic pollution. With plastic pollution and the effects of climate change being major issues for our ocean, seas, and rivers, the third point examines the marine species and ecosystems that are particularly vulnerable to both.

Plastic pollution is having a devastating impact on marine biodiversity – from individual animals mistakenly ingesting plastic bags to entire habitats polluted with microplastics. Mainly sourced from fossil fuels, and with global demand set to rise, the production of plastic is predicted to emit more than 56 billion Mt of carbon dioxide in GHGs between 2015 – 2020, which is 10 – 13 % of the entire remaining carbon budget.*

Climate change is already causing more extreme weather events including storms and flooding which increases the dispersal of mis-managed waste between land and sea. In addition, sea ice is a major trap for microplastics which will be released into the ocean as the ice melts due to warming.

Public awareness and media coverage of both issues has risen exponentially over the years, but studies show that they are often approached as separate, even competing issues. Professor Heather Koldewey, Senior Technical Specialist at ZSL and the senior author on the paper says that integrated solutions to mitigate against both crises are possible and must be considered.

“Climate change is undoubtedly one of the most critical global threats of our time. Plastic pollution is also having a global impact; from the top of Mount Everest to the deepest parts of our ocean. Both are having a detrimental effect on ocean biodiversity; with climate change heating ocean temperatures and bleaching coral reefs, to plastic damaging habitats and causing fatalities among marine species. The compounding impact of both crises just exacerbates the problem. It’s not a case of debating which issue is most important, it’s recognising that the two crises are interconnected and require joint solutions.”

The study demonstrates how vulnerable species and habitats which are impacted by, and can have an impact on climate change, are also threatened by plastic pollution, such as sea turtles and corals. It says that further research is needed to determine these links, their roles in our natural environment, and how both issues interact to negatively impact ecosystems.

“The biggest shift will be moving away from wasteful single-use plastic and from a linear to circular economy that reduces the demand for damaging fossil fuels.”

Helen Ford, PhD researcher at Bangor University who led the study said:
As coral reefs are the focus of my research, I am reminded daily of how vulnerable these marine ecosystems are to climate change. I have seen how even the most remote coral reefs are experiencing widespread coral death through global warming-caused mass bleaching. Plastic pollution is yet another threat to these stressed ecosystems.

“Our study shows that changes are already occurring from both plastic pollution and climate change that are affecting marine organisms across marine ecosystems and food webs, from the smallest plankton to the largest whale. We need to understand how these threats to ocean life will interact as they build and encourage policy-makers to act to address these global threats.”

The recognition that global environmental crises are intrinsically linked is increasing. A recent ZSL-led study which was also co-authored by Professor Koldewey, stressed that both the climate change and biodiversity crises must be tackled in unison to avoid falling short on solutions, and suggests ways in which several Nature-based Solutions could address both.

ZSL is urging world governments and policy makers to put nature at the heart of all decision making in order to jointly tackle the combined global threats of climate change and biodiversity loss and will be calling on leaders to make this commitment at COP26 in Glasgow in November. You can support ZSL’s world-leading conservation work by donating to us online. Visit www.zsl.org to find out more.