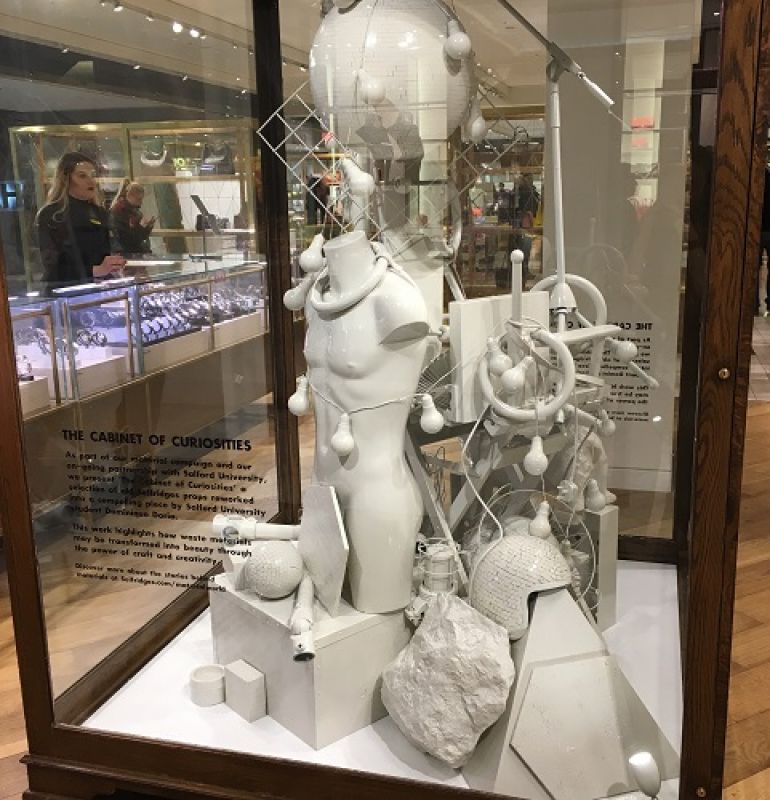 A sculpture made out of ‘junk’ that was created by a student at the University of Salford, is on display in Selfridge’s Manchester store.

The sculpture, called ‘The Cabinet of Curiosities’ was created using salvaged props found in a storage cupboard at the store. It was designed by Fashion Image Making and Styling student Dominique Doria, as part of Selfridge’s global ‘Material World’ campaign.

Dominique, 22, said: “Last year, Selfridges gave the class a brief and we had to interpret it and create something for the Material World Campaign. I was delighted that my idea was chosen. The sculpture was created using materials that would have otherwise have gone to waste, and once I had selected the individual items, I then spray painted them all white.”

Some of the items that make up Dominique’s sculpture include an unused mannequin, several disused light bulbs and a microphone. It represents the concept that highlights how waste can be transformed in to “beauty using creativity”.

hThe ‘Material World’ campaign is a global campaign that is currently being run by Selfridges. It invited people to explore the materiality of our clothes, and the effect the clothes we wear have on the planet.

Dominique, from Chorley, continued: “Before I started this project, I didn’t really know what sustainable fashion was. As I started working more on the brief, I became more aware of how many clothes and other things we throw away just because they’re not in fashion, when actually so many things can be up-cycled to create something new”.

Christine Ratcliff, programme leader on the Fashion Image Making and Styling course said: “Everyone wants to work with Selfridges so we are very lucky to have this collaboration with them. It really is a fantastic opportunity for Fashion Image Making and Styling students to get hands on experience in industry. The students were given a lot of freedom to interpret the brief however they wanted, and I was very impressed by some of the student’s concepts that were pitched to Selfridges.”

The sculpture, which is in the middle of the store, is expected to be on display for another month.

Man robbed at knifepoint of his moped in Whitefield