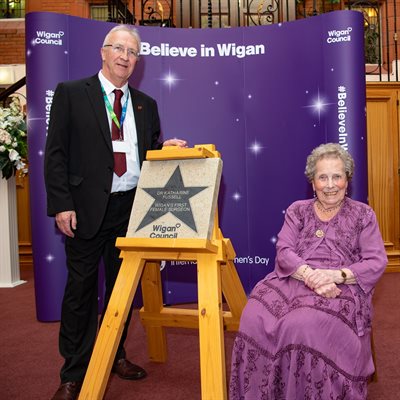 Wigan Borough’s first female surgeon has been celebrated with a civic honour in acknowledgement of her dedication to helping others.

Yesterday, Dr. Katharine Fussell, aged 90, had a star unveiled on Believe Square – an honour reserved for people who have given outstanding service to their chosen field.

Kate lives in Wigan and has dedicated 20 years of her professional life as a consultant surgeon general at the Royal Albert Edward Infirmary. At the time, she was one of only six female surgeons in the country and was the first in Wigan.

Happily retired since 1990, Kate has continued to give back to the borough by volunteering for Wigan and Leigh Archives and Heritage Service in Leigh over recent years, helping with various projects including transcription of historic diaries and journals and keeping the other volunteers amused with amazing stories of her life and career.

Kate is a long-standing member of the Soroptomists and was made president of Soroptomist International of Great Britain and Ireland in 1986, a post she held for one year.

Through her work as Club President of Soroptimist International Wigan and Regional, Kate campaigned locally to establish Wigan’s first mammography unit and helped to set up the borough’s osteoporosis support group.

Leader of Wigan Council, Councillor David Molyneux said: “Dr. Fussell is a true inspiration to us all but particularly young girls and women everywhere, especially in our borough.

“She will go down in history as the first female surgeon in Wigan and having celebrated International Women’s Day last week, the unveiling of this star is even more poignant.

“It’s only right we recognise her achievements and commitment to the borough and its people in this way.”

Dr. Fussell qualified at Birmingham Medical School in 1951 after receiving a state scholarship. Her extraordinary background includes being schooled in Oxford, Birmingham and New York, before she joined Wigan’s hospital in 1970.

Speaking of the achievement, Kate said: “I’m privileged that the council has given me this star and feel honoured that it will be placed among such inspirational people who have done great things for our town.

“My love for science started at a very young age and I loved working in healthcare.

“I hope that my experiences can show other girls and women that they can achieve great things. The event was fantastic – thank you to the Mayor for hosting me and to the council for this opportunity.”

Kate was presented with her star in front of family and friends, as well as previous colleagues and Andrew Twist, Consultant Anaesthetist and Medical Director for Surgery at WWL.

The permanent acknowledgement of Dr. Fussell’s achievements comes 20 years after she was given the Freedom of the Borough – the highest honour the council can bestow.

Over a third of local areas in England reduce real terms spending on low...