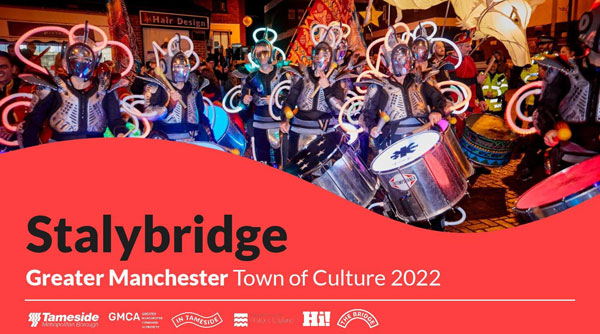 STALYBRIDGE’S year as Greater Manchester Town of Culture gets off to a spectacular start in Armentieres Square on Friday, March 11, when two great events take place simultaneously.

An hour-long show featuring music, dance and even a mountain biking film will be staged inside the civic hall while the first Street Fest of 2022 takes place outside on the banks of the picturesque and historic Huddersfield Narrow Canal.

The Town of Culture title, which is awarded by the Greater Manchester Combined Authority, will enable Stalybridge to build on its existing programme of cultural activity and create further exciting opportunities for residents and visitors as well as a lasting legacy for the town.

A key feature of the prestigious accolade involves developing a cultural programme for 2022 consisting of projects such as artist-led walks and trails, theatre and storytelling. These will tie in with existing highlights in the town, including Street Fest and the Whit Friday band contests.

The launch show, which begins at 6pm, pays tribute to Stalybridge’s past, present and future as a centre for the arts and creativity. It features music from the Stalybridge Old Band – the oldest in the world, dance performances from GG Robots and the Sarah England School, and a film about the new Tame Valley Mountain Bike Trail.

Meanwhile, from 5pm, families can enjoy Street Fest and all the delicious food and drink which proved so popular when the pilot events were staged last year.

Street Fest is a continental-style street market with stall-holders offering a vast array of mouthwatering dishes ranging from pizza and paella to ice cream, pancakes and Indian and Malaysian food, as well as beer and wine.

Additionally, the Astley Cheetham Art Gallery will have its doors open from 6 to 8pm to preview their exhibition “Making in Tameside”. This is a specially curated collection by Sarah Hardacre and features unique artworks created in response to Tameside’s urban and natural landscapes.

Cllr Leanne Feeley, Tameside Council’s executive member with responsibility for culture, who represents the Dukinfield-Stalybridge ward, said: “The launch show and street fest on Friday, March 11, comprise a spectacular start to what will be a very exciting year for Stalybridge and Tameside.

“As a Stalybridge resident and councillor I’m immensely proud we’ve achieved the Town of Culture title. It will allow us to build on our heritage and all the wonderful work already taking place, while creating new opportunities and a new chapter in the town’s story.”

Cllr Eleanor Wills, the executive member leading on Street Fest, and also a Dukinfield-Stalybridge ward member, added: “These are clearly very special days for my home town of Stalybridge and I’m really looking forward to a year packed with special events for everyone to enjoy.

“Right from its remarkable launch last July, Street Fest steadily grew in popularity and attracted thousands of people into the town centre. I fully expect that popularity to increase even further as it runs alongside the exciting cultural programme that’s been organised for the coming months.”

Four in hospital after speeding car crashes in Bury