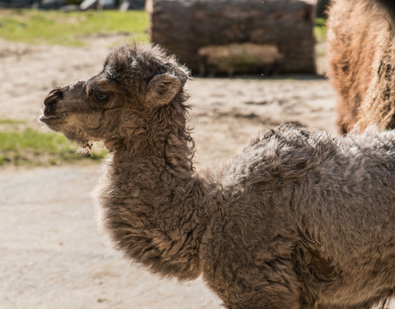 As the world watched and waited for the arrival of the royal baby keepers at Blackpool Zoo were heralding their own special delivery – and have named him in honour of the new prince.

A tiny, double humped Bactrian camel calf arrived on the same day as Prince Louis, and mother, Tibet and baby are doing well.

Just like Kate, Tibet isn’t a first time mum but she is slightly ahead of the Duchess with five births under her belt!

As availability in the Lindo Wing at St Mary’s hospital wasn’t great this week Tibet gave birth in the camel birthing suite Blackpool Zoo after a 13-month gestation.

Johnpaul Houston, Assistant Head Keeper at Blackpool Zoo, said: “We were all delighted to welcome our first camel calf of the year and he was spotted by keepers just as news broke that the Duchess of Cambridge had gone into labour.

“We are hoping for some more calves to join Louis as the season gets into full swing and any additional arrivals will share the same father, who is called Sid.

“Our camels packed up their humps and moved into our former elephant house earlier this year after Kate the Asian elephant moved across the zoo to our brand new, multimillion pound Project Elephant development, and everyone has settled in really well.

“This baby is also very special as he is a domestic Bactrian camel, whose wild Mongolian cousins are critically endangered. There are less than 600 remaining in their native Gobi and the Taklimakan deserts of Mongolia and Xinjiang.

“Here at Blackpool we are ambassadors to the plight of this magnificent, double humped camel and in June this year we are hosting the ABWAK Camelid symposium, when Camelid specialists from across the country will come together and learn from each other.

“What’s more, the revered John O’Hare, who runs the Wild Camel Protection Foundation, will be delivering the key-note address.”

Blackpool Zoo has enjoyed huge success in breeding this species in the past decade and is home to a group of eight camels consisting of Sid, Olivia, Tibet, Karamay, Alice, Elsa, Georgie and baby Louis.

Bactrian Camels have two humps, whilst the Dromedary Camel has just one.