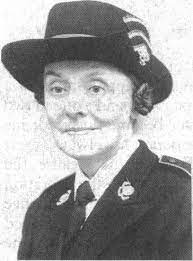 A doctor dedicated to inspiring women in Wigan Borough will be acknowledged permanently with a Blue Plaque on the exterior of her former home.

This May, 80 years after Dr. Muriel Haigh set up Soroptimist International Club Wigan, a plaque will be installed near Mesnes Park in Wigan, where her son Dr. Colin Haigh currently lives with his wife.

In 1927, Dr. Muriel Haigh was the first female doctor in Wigan Borough to open her own GP practice.

She practised successfully for 40 years and trained volunteers working at the Royal Albert Edward Infirmary before being admitted to the Venerable Order of St. John Ambulance as a serving sister – an honour bestowed upon her by Queen Elizabeth II. The following year, she was appointed Wigan Corps Surgeon.

Councillor Chris Ready, cabinet member for communities and Culture at Wigan Council said: “Though Dr. Muriel Haigh was born in Hastings and qualified in London, she was a true adopted Wiganer.

“She galvanised a group of local professional women, who all had the enthusiasm and vision to claim a voice and reach their potential.

“Thanks to her dedication to the cause, the Soroptimists have raised thousands for charity and have celebrated many achievements of young women in the community of Wigan Borough.

“This inspirational attitude makes up a large part of our borough’s rich heritage and recognising those who have contributed significantly to the cultural history of Wigan Borough is extremely important.”

In addition to her formidable career, Dr. Muriel Haigh was an accomplished pianist and set up Wigan Music Society – a group which also celebrates a successful 80 years in 2021.

“Female patients were especially appreciative that she could treat their problems. Many Wigan folk worked in the mines and Dr. Muriel Haigh was significant to the health and wellbeing of all individuals, courageously treating patients underground.

“Dr. Muriel Haigh devoted her life to serving the people of Wigan and had a particular sensitivity to the needs of women, children and the economically disadvantaged of the time.”

It is hoped that an unveiling event can take place in May with members of Dr. Muriel Haigh’s family and representatives from the Soroptimists and Music Society in attendance.

Angela added: “The name ‘Soroptimist’ loosely translated from Latin means ‘the best for women’ and that is absolutely what Dr. Murie Haigh set out to do.

“She strived for good public health for economic balance and this is a strong link to the mission and values of the Soroptimists.”