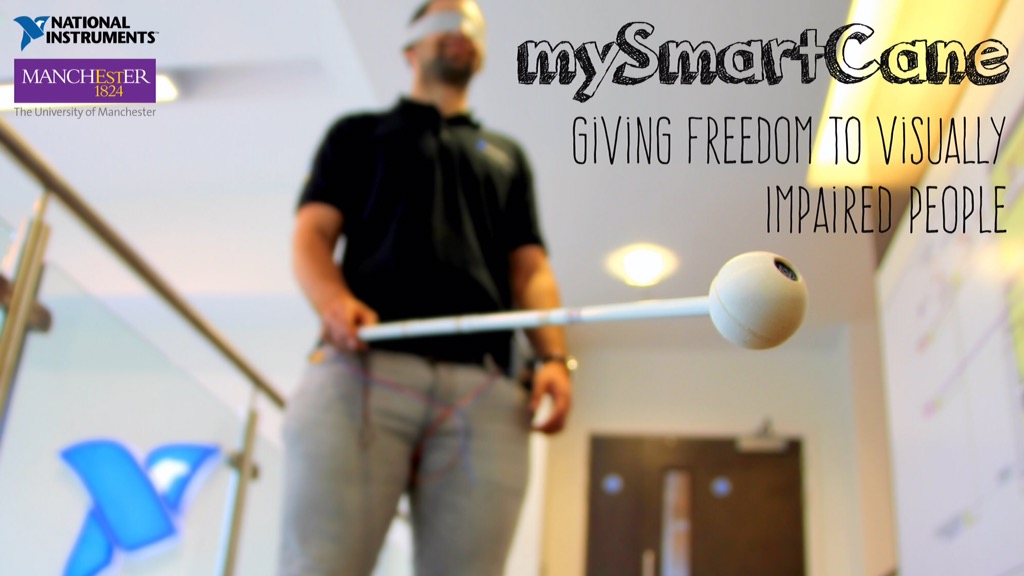 An enterprising researcher from The University of Manchester has developed a prototype tool that could help transform the lives of the blind and visually impaired.
Vasileios Tsormpatzoudis has upgraded the white cane – which has been used as a mobility tool for centuries – by adding a low-cost embedded computer that functions in a similar way to a car parking sensor.

PhD student Vasileios, from the University’s School of Electrical and Electronic Engineering, was inspired to develop mySmartCane after witnessing the struggles of his mother who has retinis pigmentosa, a hereditary eye disorder which affects the retina.

“mySmartCane allows visual impaired people to sense their environment beyond the physical length of their cane,” said Vasileios Tsormpatzoudis, who is researching energy storage and power network integration at The University of Manchester.

“The user is alerted to approaching objects using gentle audio, rather than waiting for the cane to physically bump into the object. Navigation is therefore easier and much faster.”

He added: “My main inspiration was my mother, who has retinis pigmentosa. I have seen first-hand the struggle visual impaired people have to put up with when they try to navigate with the traditional white cane.Even though the white cane is a simple and marvellous invention, it is stuck in the past. This project was my opportunity to give this traditional device a 21st century upgrade.

“In preparation for the project, I conducted many conversations with existing white cane users. The key takeaway was that my modernised white-cane had to be as simple and low-cost so I used 3D printing and cheap sensors to create an ultrasonic sensory ball, which attaches to the bottom of most existing white-canes.”

Vasileios explained that mySmartCane, which was developed during his industrial placement at National Instruments, works much like a common car parking sensor. The ultrasonic ball wirelessly measures the distance to approaching objects and converts this data into an audio signal. The visually impaired user can gauge the object distance from the frequency of the sound.

The user can hear the sounds using either a single headphone or a pair of bone-conducting headphones, so they can listen to their external environment without losing their freedom.

Vasileios says his prototype is still at an early stage and added: “I do have many ideas to refine the design further. For example, I want to add an additional sensor to detect overhead obstacles such as sign-posts or doorways which could cause injury and are impossible to detect with a normal white cane. Another innovation could be using vibration rather than sound.”

Richard Roberts, Vasileios’ project supervisor during his placement at National Instruments, said: “I was blown away by Vasileios’ invention. It’s an inspiring example of the life-changing impact that young engineers can have. It’s also a testament to practical engineering skills taught at The University of Manchester, the power of National Instruments technologies and, of course, Vasileios’ unbounded creativity. I think this highlights that Manchester is a hotbed of engineering talent.”

Jailed for 21 years for sexual abuse of three young girls