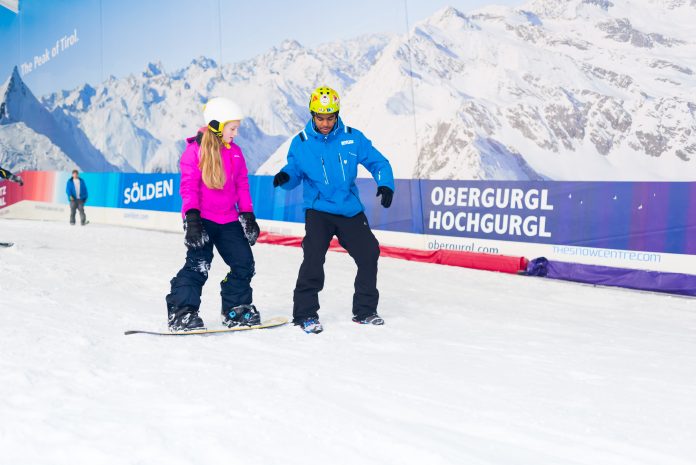 Scores of disadvantaged young people hoping to transform their lives have signed up for a snow sports programme which begins this summer.

Snow-Camp charity, whose supporters include rower Sir Steve Redgrave, Britain’s most successful skier Chemmy Alcott and Olympic medal-winning snowboarder Jenny Jones, will launch its north west scheme at Chill Factore near the Trafford Centre on Monday August 13. Chemmy and Team GB Winter Olympics star Emily Sarsfield will be among those attending the launch.

Snow-Camp is a national charity which gives young people aged 13-21 the chance to develop their skills and confidence through snow sports. So far, around 150 have signed up for First Tracks, the organisation’s debut programme in the north west, with 200 places up for grabs in total. It is a two-day introduction to skiing and snowboarding and for every hour participants spend on the slopes they will also be taught life skills to help build their confidence and self-esteem. After First Tracks, Snow-Camp North West will offer further training courses leading to instructor qualifications and job opportunities.

The programme is being financially supported by AJ Bell, the Manchester-headquartered investment platform.

Chief executive Andy Bell said: “Snow-Camp’s innovative and entrepreneurial approach of using snow sports to engage young people and help them improve their lives fits perfectly with our own ethos and culture.

“It provides life skills training, nationally-recognised qualifications and work experience to help young people increase their motivation and aspirations, enabling them to gain employment in the snow sports industry and beyond. “We think the programme will be a great asset to the north west where we are based, and we are delighted to support the launch.”

Since its launch in 2003, Snow-Camp has helped thousands of young people through programmes in London, Bristol, the Midlands, Cardiff and Scotland. For the north west programme, Snow-Camp is working with youth projects and youth service providers across the region. Those who have signed up so far have been recruited through projects and groups in Manchester, Salford and Liverpool.

Dan Charlish, founder of Snow-Camp said: “We’re incredibly excited to launch First Tracks in Manchester. Our programmes have turned around the lives of young people in cities across the UK and we are looking forward to reaching more in the north west. “Many of Snow-Camp’s participants are on a negative life path and need support to change their direction. They need someone to believe in them and give them an opportunity. “Snow-Camp enables them to develop their skills and confidence through snow sports, which many are experiencing for the first time in their lives.”

Local nursery group, Back to the Garden Childcare, is underlining its commitment to a...