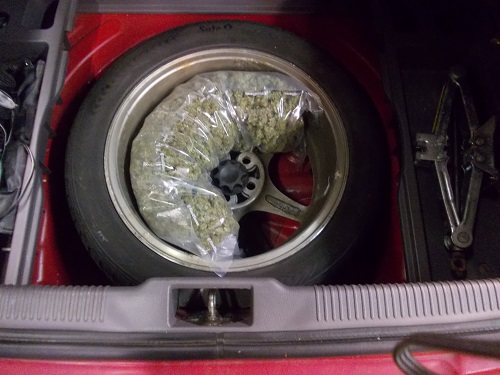 Six people have been jailed for their part in an international drug operation after a bag of cannabis was discovered in a spare tyre.

The court heard how on 14 October 2016, Steven Roberts took a plane to Barcelona, closely followed by Anthony Redmond and Michael Madden, maintaining regular contact with Darren Dunn who was in prison throughout the trip.

A week later, after sourcing the cannabis, Roberts flew back while Redmond and Madden drove the drugs back to Manchester on a ferry.

Meanwhile on 31 October 2016, after being contacted by Dunn from prison, Tierney and White drove to a car park near HMP Forest Bank where they flew a drone into the prison.Dunn was in constant contact with Tierney so he could coordinate the transfer of cannabis.

Again, on 13 November 2016, Roberts and Redmond travelled to Spain and returned two days later, having replenished their supply of cannabis.

Shortly after, Tierney was seen in the park opposite the prison, attempting to transfer cannabis again.

Officers tried to stop him, but he managed to escape and ring Dunn to let him know the police were onto their operation.

The following day, Tierney was arrested after they found his abandoned bag which contained the drone, socks full of cannabis, mobile phones and two bags of pills.

In December the international operation unravelled after Roberts was seen exchanging £2,500 into Euros before he travelled to Barcelona, followed by Madden and Redmond in their car.

After a two-night-stay in the city, Redmond and Madden returned to the UK on the ferry and were stopped by Border Force Officers who found bags of cannabis in the boot and around the spare wheel.

When questioned about the drugs in the car, Redmond told officers he didn’t know they were there.

Despite protesting his innocence, Dunn was found guilty at an earlier hearing, while the other five defendants pleaded guilty to the drug offences.

Detective Sergeant Colin Shackleton of GMP’s Serious and Organised Crime Unit, said: “Their well-oiled plan was brought to an abrupt end when the drugs were discovered in their car.

“They thought they could outsmart officers by crossing borders to obtain the drugs, but we’ve shown we’ve got the experience and skill to bring organised criminals like this to justice.

“With every conviction we’re a step closer to taking dangerous drugs off our street, but ensuring results like today relies on people sharing information about criminal activity in their area.”