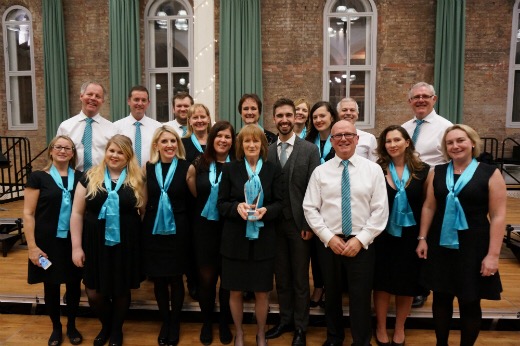 The Siemens choir has been crowned winners of the 2015 Hallé Corporate Choir Competition, beating off strong competition on Friday 4 December from Bruntwood, First TransPennine Express, Nightingale Centre, PwC, PZ Cussons and Together.

The team will now perform alongside the Hallé at the Bridgewater Hall during its popular Christmas sing-along on Friday 18th December.
Alongside the winning choir, the PZ Cussons choir were also recognised being given the Sir Mark Elder Award for the most captivating performance.
Robin Phillips, Financial Director of Siemens Digital Factory & Process Industries and Drives, and Siemens choir member said:

“Bringing singing into the workplace is something we absolutely can recommend; for those involved it has improved collaboration, confidence, wellbeing and is so much fun. We’re always delighted to participate in the Hallé’s festivals and competitions, and to be announced as winners of the 2015 Corporate Choir Competition is something of which we are extremely proud.”

This competition, now in its third year, was established with support from the North West Business Leadership Team after the Hallé was awarded the prestigious Lever Prize in 2013. Since then it has grown with several choirs rehearsing all year round and an Annual Corporate Choir Festival established last summer.

Registration for entrants for the 2016 Hallé Corporate Choir Competition is now open, with a special Early Bird offer for those who book before the end of March.