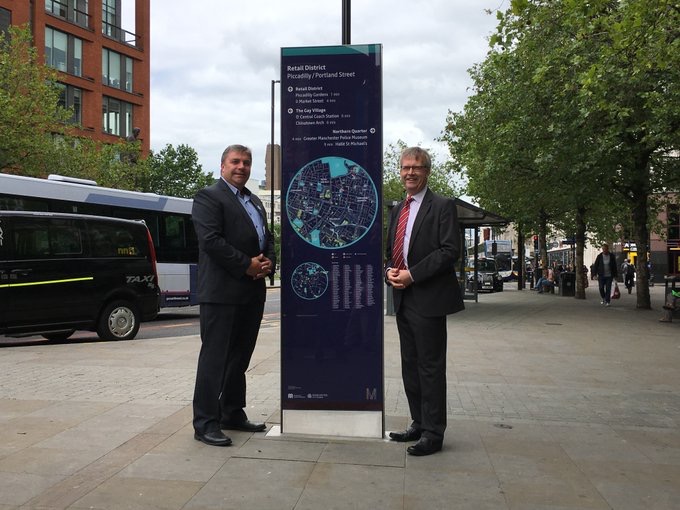 Residents and visitors to Manchester are set to benefit from a new easy-to-use wayfinding system helping them to navigate their way around the city centre on foot.

As part of an innovative new project taking its que from other leading city-regions around the world, 28 eye-catching and informative new signs have been installed at prominent locations between Piccadilly and Victoria stations. The signs will provide a clear route between the stations as well as directions to important shopping and cultural destinations.

Councillor Mark Aldred of Greater Manchester Transport Committee, said: “Manchester is on the up and it’s growing both in terms of residents and visitors and that means more people than ever are heading into the regional centre for work and leisure.

“Having a clear wayfinding system helping people to quickly and easily navigate around the city on foot is therefore critical as we look to encourage active travel, reduce congestion and tackle air quality. The signs provide an eye-catching and accessible on-street scheme to help people get from A to B and help them to take in some of the amazing things to see and do in Manchester.”

The signs form part of Transport for Greater Manchester’s (TfGM’s) GM Connected Wayfinding project, which is aimed at making the navigation of the city centre easier, faster and more accessible when walking. Alongside the signs, 60 maps will be installed at Metrolink and bus stops and 250,000 printed maps have already been distributed to city centre venues and TravelShops. They will all share the same branding and style to create an easily recognisable and cohesive system.

A prototype sign was installed outside Shudehill Interchange earlier this year. Feedback from stakeholders to date has overwhelmingly positive. Local businesses in particular have pointed out that better signage to guide visitors round the city centre is urgently needed.