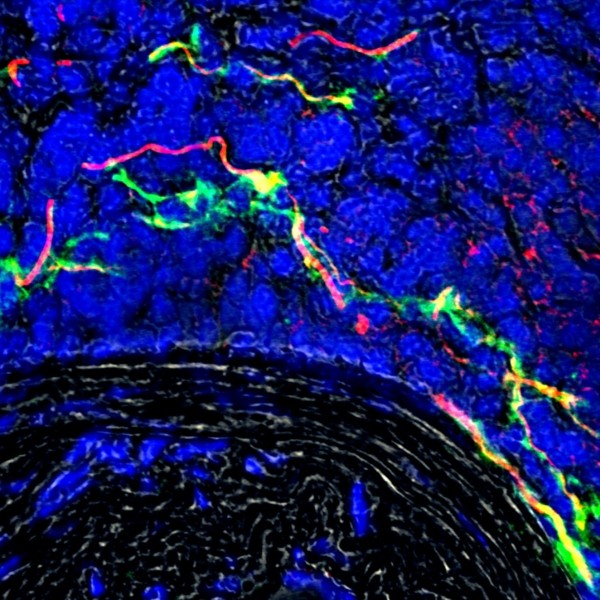 An international team which includes University of Manchester scientists has for the first time demonstrated that nerve signals are exchanged between clogged up arteries and the brain.

The discovery of the previously unknown electrical circuit is a breakthrough in our understanding of atherosclerosis, a potentially deadly disease where plaques form on the innermost layer of arteries.

The study of mice found that new nerve bundles are formed on the outer layer of where the artery is diseased, so the brain can detect where the damage is and communicate with it.

Early evidence gathered by the team indicates this also happens in human arteries.

The study, published in Nature today (27/04/22, 4 pm bst) could one day herald new treatments for the causes of the disease where deposits progressively constrict the lumen of arteries leading to heart attacks, strokes and other problems.

According to the scientists, signals are conveyed by nerves from arteries containing plaques to the brain.

After the brain has processed the signals, the information makes its way back to the affected blood vessel.

“In recent decades, nobody has asked whether there is a direct connection between the artery and the brain – the obvious reason being that atherosclerotic plaques are not supplied by nerves,” says lead scientist Dr. Sarajo K. Mohanta from the University of Munich Institute for Cardiovascular Prevention.

“But atherosclerosis is more than just a plaque; rather it is a chronic inflammatory disease of the entire artery. Our findings relating to its outer layer are very relevant.”

“In the long term, we hope to be finally able to treat the causes of atherosclerosis although that may well be some way off yet.”

The scientists mapped the neurological circuit by infecting nerve cells called neurons with a virus whose antibody creates a fluorescent trace, while finding its way up from diseased arteries to the brain.

They were then able to follow the trace, allowing them to compare healthy against diseased mice and to directly identify the electrical connections.

In the rodents which had experimental therapy where the connections were severed, atherosclerosis was less developed than in the control mice.

Dr D’Agostino, a neuroscientist from The University of Manchester involved in the study and who is also a Medical Research Council Fellow, said: “Today we have the tools not only to visualise, but also to turn on or off nerve bundles connecting the brain with the body with unprecedented selectivity. This gives us a greater understanding of how the brain and other parts of the body are wired together during health and disease.

“The novel technologies we have been using make it possible to reduce the boundaries between disciplines that were previously working in isolation. And that, in the long term, could have a significant impact on the development of novel therapeutics and ultimately improve human health.”

Arteries have three layers, though plaques are only found on the innermost layer.

Scientists have long known that the innermost layers  are not supplied by nerve fibres. “As such, no one has asked whether nerves come into contact with arteries in the case of atherosclerosis so this  could open up a new understanding of atherosclerosis” says senior author Professor Andreas Habenicht, also from the University of Munich.

However, the team revealed that molecular sensors known as receptors, located in the outer layer of the vessels, play a key role.

The receptors recognize where plaques are located and where vessels are inflamed by identifying the inflammatory messengers of the inflammation.

Then the receptors at the nerve endings translate the inflammatory signals into electrical signals via nerves to the brain.

The brain processes the signals and sends a stress signal back to the inflamed blood vessel. This negatively influences the inflammation, and the atherosclerosis gets worse.

Co-senior authors Professor Daniela Carnevale and Giuseppe Lembo, from the University of Rome and the Neuromed Institute in Italy, studied mice in which electrical connections between a diseased artery and the brain were severed.

In mice which had the experimental therapy, atherosclerosis was less developed than in the control mice.

New sepsis screening would “miss” large proportion of cases if used in the UK,...