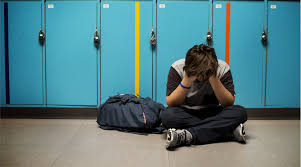 Victims of bullying in secondary school have dramatically increased chances of mental health problems and unemployment in later life.

New researchers led by Lancaster University Management School researchers reveals stark consequences a decade on for pupils subjected to bullying. Those who are the victims of persistent or violent bullying suffer the worst consequences.

It also increases the probability of being unemployed at age 25 by about 35%; and for those in work, it reduces their income by around 2%.

Co-author Emma Gorman said: “Bullying is widespread in schools, and many studies document a negative relationship between bullying and educational outcomes. Bullying is also an important policy issue because of concern that in addition to educational outcomes, being bullied may lead to negative impacts on young people’s lives in the long-term, such as low self-esteem, mental health conditions and poorer job prospects.

“Our research shows that being bullied has negative impact on important long-term outcomes, especially unemployment, income and ill-health. Being bullied causes detrimental effects on children’s lives not just in the short-term, but for many years after. These are more pronounced among pupils who experience persistent bullying, or violent types of bullying.

“Our findings suggest that a more targeted approach to reduce the most extreme forms of bullying may be warranted.”

The research, presented at the Royal Economic Society’s annual conference at the University of Warwick, analysed confidential data on more than 7,000 school pupils aged 14-16 from the Longitudinal Study of Young People in England.

About half of pupils involved, who were interviewed at regular intervals until they were 21, and once again at age 25, reported experiencing some type of bullying between the ages of 14 and 16. The information – reported by both the child and parents – recorded how frequently the children were bullied, and what type of bullying they experienced.

Examples of bullying within the study include being called names; being excluded from social groups; being threatened with violence; and experiencing violence.

As well as the consequences later in life, the research shows bullying affects the academic achievement of the victims while they are in school, and beyond into further and higher education.