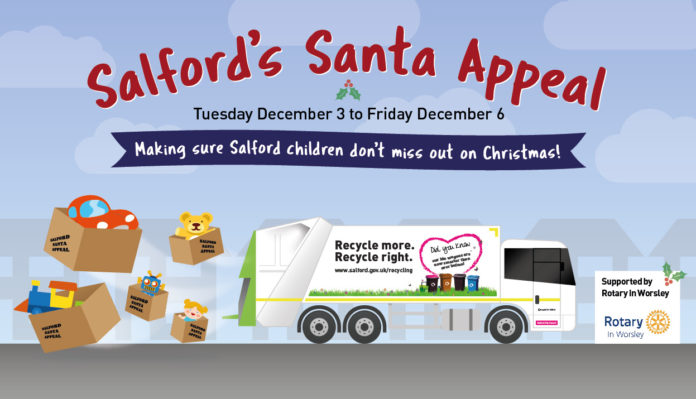 Christmas couldn’t happen without the kindness of strangers.

That’s the message from Salford Women’s Aid, one of the charities which will be supported with gifts from this year’s Salford Santa Appeal.

Salford City Council’s bin crews take to the road this week to collect presents left out with any bin or food caddy and are hoping to smash last year’s 5,000 gifts donated by generous Salfordians.

“Our four staff give up their Christmas to try and make it as special as possible for our mums and children because we know they have left everything behind – toys, clothes, family and friends. But, without the kindness of strangers to support us, it would be bleak,” she said.

“We provide a buffet on Christmas Eve and then on Christmas Day the mums and children cook a big dinner with donated food or food we buy from cash donations.  We put up decorations and a tree and try to make our two refuges as much like a home as possible even though they can’t have family or friends to visit or even receive presents from them for their own safety.

“Last year two of the bin men, Sam Barry and Bob Critchley came and played Santa and his elf at a Christmas party for us and the children loved it. We also try to take them to a panto as some of them have never been to one in their lives. It’s all about showing them that there are good people in the world after all they have been through.”

The refuge, which is an independent charity, takes mums and children up to 12 years old who have fled intolerable domestic abuse. Some are able to return home with new safety measures and support in place while others stay until they can be rehoused.

Sam, whose idea sparked the appeal last year, said: “It was fantastic to see how the children responded when we walked in as Santa and the elf. I started the appeal because couldn’t bear the thought of children in Salford missing out on Christmas and was overwhelmed at the generosity of Salford people last year.

“We’re on the road this week collecting and I hope people will be as kind again. Even the smallest item shows the children or young people that someone is thinking of them and makes their day.”

Councillor David Lancaster, lead member for environment and community safety, said: “It’s heartbreaking to think what these women and children have been through but they are now in a safe and caring place. I’m sure the people of Salford will do all they can to help them and others in need.”

Presents, which should be new and unwrapped for safety, can be left with any bin or food caddy being left out for collection this week or handed to the crews who will be wearing red high vis jackets and Santa hats sponsored by the unions. Gifts can also be donated at Eccles, Pendleton, Walkden or Swinton Gateways or Broughton Hub or at Unison’s offices or Salford Civic Centre, both on Chorley Road, Swinton. Volunteers from Rotary in Worsley will help sort and distribute the gifts when the appeal closes.

Salford Women’s Aid is also appealing for donations to fund the Christmas dinner. You can donate at this link here