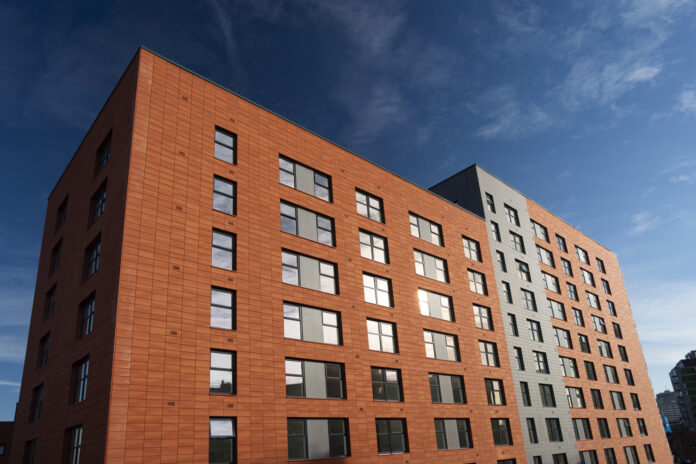 A new apartment block named in honour of one of Salford’s most famous sons is now open – bringing more than 100 affordable homes to the city.

The first residents are now moving in at Artifex in Trinity – the flagship development from housing association Salix Homes named in tribute to the late Canon Peter Green – a local rector, published writer and pacifist who was passionate about fighting social injustice.

During the First World War and until the 1950s, Canon Peter Green wrote a weekly column in The Manchester Guardian – which was later to become The Guardian – under the pen name ‘Artifex’.

He wrote about pacifism and compassion as well as articles about social injustice and women’s suffrage and is fondly remembered as a ‘real man of the people who loved the Salford people’.

Artifex comprises of 108, one and two-bedroom apartments all available under the Rent to Buy Scheme.

Rent to Buy is a government scheme designed to ease the transition from renting to buying a home by providing a subsidised rent at around 20% below the market rate. People are able to rent the properties for five years at the reduced rate leaving room for them to save towards a deposit and then have the option to buy their home after the five-year period.

The first residents to move in were Mike Nyoni, with his partner Megan and their two young children. Mike is a restaurant manager while Megan is a support worker.

The family had previously been in private rented accommodation but had to move when the landlord decided to sell the property.

Mike explained: “We just feel so lucky to have found Artifex – it’s in a brilliant location, it’s so convenient and it’s absolutely beautiful – we’re really happy here and it already feels like home.

“The Rent to Buy scheme is perfect for people like us. We’ve been renting for years, but you just feel like you’re paying for someone else’s house, but now we’re working towards buying the place we are living in.

“We never thought we’d be able to buy a property because it’s so difficult to get a mortgage these days, but now we’re looking forward to becoming homeowners – we feel like we’ve won the lottery.”

Artifex is among the first new-build developments for Salix Homes, which has a number of other affordable housing developments in progress across Salford and Greater Manchester.

Sue Sutton, chief executive at Salix Homes, said: “The shortage of affordable housing across the UK is a very real and prominent issue, so we are very proud to officially open this fantastic new development – bringing our vision to deliver more high quality, affordable housing to life.

“Artifex is bringing 108 desperately-needed affordable homes to an area of Salford, which has seen little to no new affordable housing for decades, so it’s great to see the first residents moving in as they take the next steps towards homeownership.

“Our ambitious development is a fitting tribute to the memory of Canon Peter Green, who is already recognised in Salford with the neighbouring Canon Green Court named in his honour back when it was built in the 1960s. He was passionate in his calls to prioritise housing for all, an ethos we share at Salix Homes, so we’re incredibly proud that his legacy will continue to live on at Artifex.”

Canon Green’s legacy has been immortalised at Artifex with a tribute to him in the lobby area, which includes an extract from one of his columns in the Manchester Guardian from 1947, in which he wrote: “When the time comes for action, let stately civic centres and the repair of cathedrals and churches, and large hotels, and super cinemas, and everything else, give place in the competition for money, man-power and materials, to homes for the people.”

Canon Peter Green was born in 1871 and served as the Rector at St Philips Church from 1911 – 1951, serving through two world wars in what was then a deprived dockyard community. He died in 1961.

He dedicated his life to supporting impoverished communities and used his platform as religious commentator at The Manchester Guardian to speak out against war, hate, injustice and racism. He also wrote 38 books and served as a Chaplain to the King.

This year marks the bicentenary of The Guardian, and John Rylands Library, which houses the Manchester Guardian archives which includes Artifex’s columns, is running an exhibition about the paper’s history, which is currently available to view online, and is running as a physical exhibition until October 10.

Salix Homes has worked alongside partner contractor Willmott Dixon on the Canon Green Campus development, which comprises of Artifex, Canon Green Court and Westminster House within one site, which borders Blackfriars Road.

Anthony Dillon, managing director for Willmott Dixon in the north, said: “With our track-record for creating new homes in Greater Manchester, we’re proud to have played our part in delivering much-needed, affordable homes for the people of Salford and an exciting and transformational investment for this growing and vibrant community.

“Existing and future residents have played a central role in shaping these plans, and it really is a project built for local people by local people as we invested more than £16.5m of our project spend with businesses in the area.”

As part of the scheme, major improvement works have also been completed at Canon Green Court for its existing residents, including new kitchens, bathrooms, heating systems, sprinkler systems and exterior re-facing and insulation, as well as an external facelift for Westminster House, and landscaping of the communal grounds.