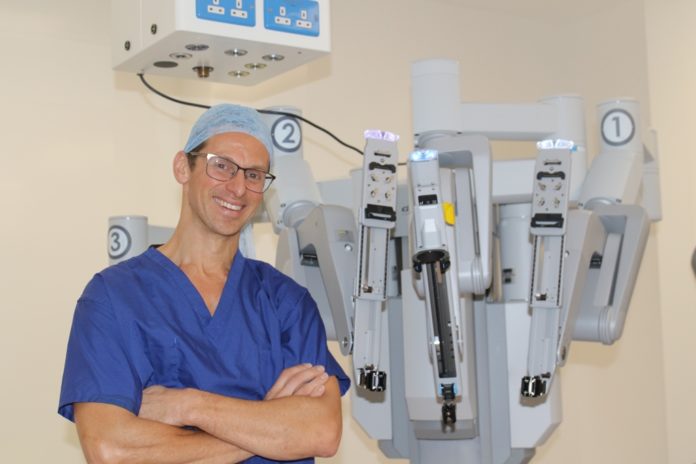 Stepping Hill Hospital’s surgical teams recently reached a landmark in their pioneering surgery, when their 1000th patient had keyhole surgery from a special surgical robot.

Since June 2015, the hospital surgical department has used Da Vinci , a state-of-the-art four armed surgical robot to carry out keyhole surgery. The robot is operated by surgeons to carry out a wide range of surgery, including the removal or partial removal of kidneys, bladders and prostates.

The robot’s arms go inside the patient though small incisions in the skin. Looking through a 3D viewfinder hooked up to a camera on the robot, the surgeon can magnify, grasp, cut and cauterise the tissue inside.

The dexterity of the robot means surgeons can operate with more precision, and the robot carries out operations with less trauma to the body than normal surgery. This means less anaesthesia, reduced blood loss, reduced pain and discomfort, and a lower risk of infection.

The 1000th patient to receive the surgery was Maureen Craig, who lives in Wistaston near Nantwich. Maureen had a tumour on her kidney picked up by a CT scan in March this year. She was booked in for a partial nephrectomy operation to remove part of the kidney in late July.

Maureen was in hospital for only two nights before going back home.  At 67 years old, Maureen still practices as a podiatrist in Wistaston, and in total she was only off work for just two weeks. By a striking coincidence, her brother who lives in America was diagnosed with the same condition in the same year, and had his own tumour removed using the same Vinci technology. Following recent check-ups, both brother and sister have recently been confirmed as tumour free.

Maureen said “The surgery was really easy and straightforward, both the Stepping Hill surgical team and the robot did a great job, yet more impressive work from our wonderful NHS. I was just so pleased to recover so quickly, and get back home, back to work, and back to playing with my grandson.”

While Maureen stayed in hospital for two nights, many patients are in for only one night. Prior to the use of the robot, patients of a similar age to Maureen undergoing this kind of operation would typically be in hospital for four to seven days, and have a recovery time of around three months.

Surgical consultant Steve Bromage, one of the team which operate the robot said “It’s a great milestone to see Maureen as the 1000th patient to have undergo our robot surgery, as it shows just how many patients have benefitted from these new techniques with quicker recovery teams and safer outcomes. It’s now an established art of the care and treatment we offer, and we’re looking forward to carrying out many more such operations to help patients in the future.”