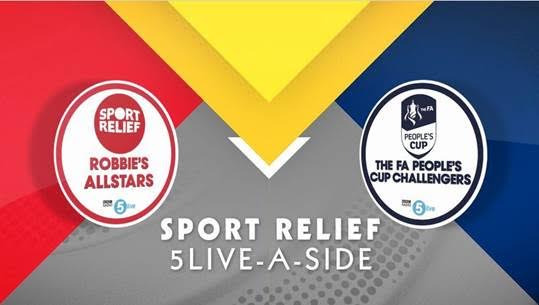 BBC Radio 5 live has announced it is to partner with The FA People’s Cup and Sport Relief to host 12 straight hours of 5-a-side football matches, with Robbie Savage as captain of a celebrity Robbie’s Sport Relief Allstars team.

The challenge will take place at MediaCityUK, Salford on 23rd March from 11am-11pm, all to raise money and awareness for Sport Relief 2018.

Robbie’s Sport Relief Allstars, a squad made up of eight well-known celebrities from the realms of sport, entertainment and music – with Sam Quek and Kirsty Gallacher announced as early signings –  face an epic challenge as they attempt to stay on the pitch for the full 12 hours. Their opponents will be The FA People’s Cup Challengers – 5-a-side teams that have been selected from The FA People’s Cup, with new teams taking to the pitch every 15 minutes.

Legendary football manager Peter Reid takes on management responsibilities for the celebrity team, guiding them through the challenge that will push them to the absolute limit and test their endurance.

Alongside the gruelling game, Republic of Ireland goalkeeper Shay Given takes to the nets to complete 12 nonstop hours of penalty shoot outs, with members of the public lining up to take their best shots against him.

Robbie Savage said: “Twelve hours of football is no easy feat, but for such a great cause it’ll be worth it. I have a fantastic team behind me and I just hope members of the public come down, give us a cheer and support us.”

Shay Given said: “I’ve faced my fair share of penalty takers in my career but to do it solidly for 12 hours takes on a whole new dimension. The challenge will be a real test of endurance but I’m up for it!”

The day will be covered extensively by BBC Radio 5 live, as well as being streamed live on the 5 live website and on the Red Button. Highlights will be shown on Sport Relief’s Night of TV, which will broadcast live from Salford for the first time ever on 23rd March, BBC One at7.30pm.

Money raised through Sport Relief helps vulnerable people across the UK and the world to live happier, healthier and safer lives.

Demi Stokes has signed a new contract for City’s women