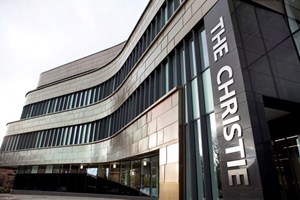 The number of clinical trials that are recruiting patients at The Christie has jumped by 11 per cent in the last year.

Figures published by the National Institute for Health Research (NIHR) show that Manchester’s specialist cancer centre recruited to 214 studies in the year ending in March 2018, compared with 193 the previous year.

Clinical research studies allow researchers to explore the benefits of new treatments both for participants taking part in the trials and for future patients.

The figures show that the number of participants recruited to trials in the past year was 1,809, which is 31 per cent higher than the target set for The Christie by the Clinical Research Network (CRN), the NHS organisation that coordinates and supports research.

The NIHR figures show that The Christie remains one of the most active NHS clinical research organisations in the UK. It is ranked in the top five per cent in the NIHR’s national 2017-18 research activity league table, which measures the number of NIHR-supported studies that trusts undertake. The league table consists of 450 NHS organisations, though not all conduct research.

The statistics aim to show the extent of research activity across all NHS trusts and clinical commissioning groups in England, providing a picture of how much clinical research is happening, where, in what types of trusts, and involving how many participants.

Professor John Radford, Professor of Medical Oncology and Director of Research at The Christie, said: ‘We’re very pleased that these figures acknowledge that we have an extremely vibrant research culture and that we’re offering patients more opportunities to take part in trials.

‘These studies not only have the potential for improving outcomes for those patients taking part, they also enrich our understanding of cancer and benefit patients in the future.’

Christie patient Cathy Perkins was diagnosed with melanoma, or skin cancer, in 2008 and was offered a place on a trial for an experimental drug. She said: ‘I was given a very poor diagnosis and conventional treatments had little to offer so it wasn’t a difficult decision to go on a trial for a new immunotherapy drug. Four and a half years on I have a life I love and appreciate, with lots of new adventures.

‘I see other people who have been on trials leading amazing lives, too. I’m so grateful to The Christie, to the scientists and the funders and to the NHS for giving us a second chance at our lives which seem so much more precious now we understand what we nearly lost. This is proving to be the future for cancer treatment.’

Wes Dale, Managing Director of Research, Innovation and Education at The Christie, said: ‘We believe the portfolio of trials we offer to cancer patients is as rich and diverse as anywhere in the country. We’re grateful to the NIHR for their support which helps us deliver so many highly complex clinical studies.’