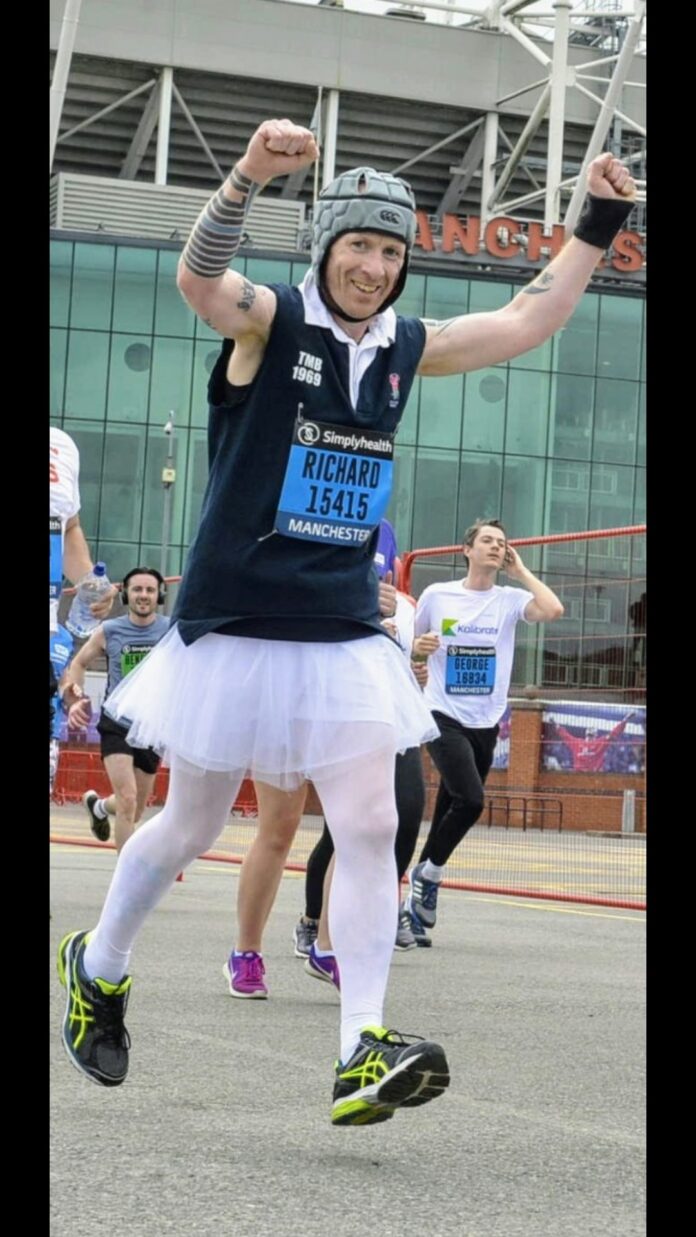 Richard Bradbury from Manchester has completed his first marathon – and is training for his second – to raise vital funds for cancer charity Worldwide Cancer Research in memory of his brother.

Richard lost his brother Tim, then 42, to cancer ten years ago, after a devastating diagnosis revealed a brain tumour which had already spread to other parts of his body.

Ten years on from Tim running the London Marathon, younger brother Richard – who turns 50 this summer – marked the anniversary by taking on the 26.2 mile challenge for the very first time.

With last year’s London Marathon cancelled due to the Covid-19 pandemic, Richard clocked up the miles as part of the Edinburgh Marathon Virtual Challenge instead, kitted out in a bright blue tutu and a scrum cap – two items with particular significance to his brother’s memory.

“Last year would have been 10 years since my brother ran the London Marathon, so it felt like a fitting time to try it myself. I only ran my first 10k in 2018, and I ran a couple of half marathons as a build-up to the main event. It was really tough – a real baptism of fire.

“My brother Tim played rugby and he also studied dance in college, so I decided to complete the marathon wearing a tutu and a scrum cap in honour of his two passions – rugby and ballet. I must have been quite a sight running around on my own in that outfit!

“Tim was only 42 when he passed away in 2011. It was quick – he was diagnosed in February and we lost him in July, two months after his 42nd birthday, and two days before my 40th.

“The tumour spread through his body quickly. He had radiotherapy treatment but the cancer was already very far gone by the time he was diagnosed.

“Tim’s children were very young when they lost their father – one, four and six years old. I’m godfather to his middle son and we’re all very close. I have two older brothers so we’re a big family, we see a lot of each other and everyone is very supportive of my running.

“I’m now back in training for the London Marathon in October and I look forward to getting my tutu and scrum cap out again! Every step I run is for my brother, so raising funds for an amazing charity like Worldwide Cancer Research feels like a great way to honour his memory.

“Being able to contribute to the important and life-changing research the charity funds across the world is just incredible.

“I’ve been overwhelmed by the response I’ve had so far. I’ve already reached my target of £2,250 so now I’m aiming for £3,500. Hopefully I can keep going beyond that!”

Worldwide Cancer Research is the UK’s only cancer research charity which starts and funds new cancer cures across the globe, backing the brightest minds around the world in their quest to find new ways to prevent, diagnose and treat cancer.

Since it was established in 1979, the Edinburgh-based charity has funded over £200million of research in over 30 countries to start new cancer cures. The charity is currently funding two brain tumour research projects, worth over £410,000, one looking at how to beat treatment resistance in childhood brain cancers, and the second hoping to better understand how a gene in our DNA allows brain cancer cells to survive and grow.

“Brain cancer affects a huge number of people right across the world. By funding more discovery research, we can continue to start cancer cures and save more lives in the future.

“We are so grateful to Richard for his amazing fundraising efforts and for helping us continue to make our ground-breaking research possible. Together, with the help of Curestarters like him, we can end cancer.”