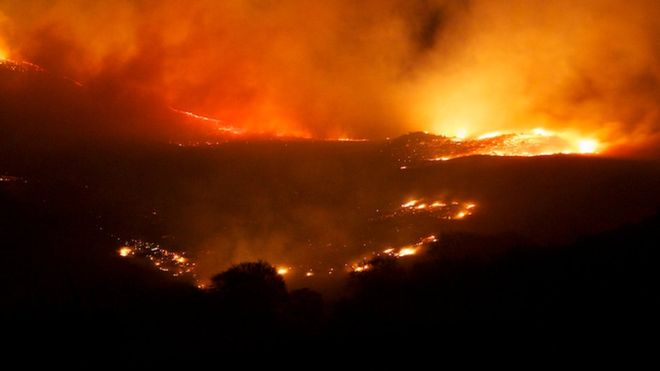 The devastating fires at Winter Hill and Saddleworth Moor are likely to have had a shocking impact on the air breathed by people in Greater Manchester, according to new analysis released today.

IPPR North’s briefing paper ‘Natural Assets North: Valuing our Northern Uplands’ finds that during the period of the fires earlier this summer, levels of particulate matter, which is linked to serious conditions such as asthma, lung cancer and infant mortality, were extremely high.

In the week following 24th June, when the fires were at their height, the legal limit for daily average exposure to particulate matter (50ppm) was breached on five occasions in different sites across Greater Manchester. What’s more, monitoring stations registered extremely high individual spikes in excess of 150ppm.

These concerns follow previous research by IPPR North which found that Greater Manchester has lethal and illegal levels of NO2 air pollution.

IPPR North has argued that policymakers must turn their attention to the “natural assets” of the North, which underpin the economy of the Northern Powerhouse, to ensure that the potential of places like Winter Hill and Saddleworth Moor is realised.

“The wellbeing of people in the North, and the health of its economy, is inescapably linked to the natural environment around us. Our upland areas, for example, play a huge role in terms of carbon storage, water supply, recreation and tourism. Our towns and cities would not function without them.

“The impact of the fires at Winter Hill and Saddleworth Moor provide a timely reminder that we must not take the North’s natural assets for granted. If we don’t value the natural environment properly, the consequences for people, the environment and the Northern Powerhouse economy can be disastrous.

“In the next phase of the Northern Powerhouse, and in the face of climate change, policymakers need to put the natural environment right at the heart of decisions about the future of the North of England. To fail to do so would be tragically short-sighted”.