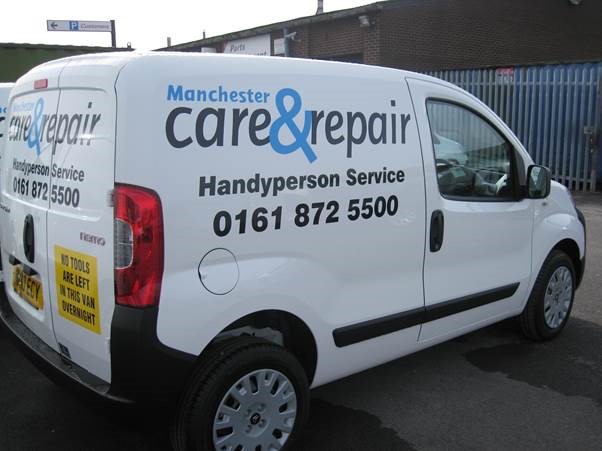 Trafford based charity, Manchester Care and Repair, is celebrating today after receiving a National Lottery cash boost, so it can expand vital home repair support to older people and those with disabilities across Manchester.

This will help the charity to recruit a team of volunteers for the first time, who will assist the group’s dedicated handypeople to complete everyday tasks, from moving furniture to installing safety rails or even fixing gutters.

The group’s experienced team of passionate handy people will teach local young volunteers new skills, providing them with the opportunity to give back to their community. As the team is relatively small and composed of tradespeople who have many years of experience under their belts, the charity is hoping to provide a source of wisdom to its new volunteers.

Many of the tradespeople have been part of the charity since its inception in the 1990s and have developed genuine friendships with the people they support over the years – making it more than your typical customer relationship.

As lockdown restrictions are expected to be relaxed further next week (Monday 19th July), the charity is hopeful its ‘Handy Helpers’ will be able to clear a backlog of repairs now they can visit people in their homes again.

Alice Mason, Executive Director at Manchester Care and Repair said: “Thanks to National Lottery players, we’re now able to recruit five local volunteers to enable our resident handy helpers to do jobs that require two people. Many of the people we support have been shielding throughout the pandemic, becoming increasingly isolated, and losing their mobility and confidence. Now we can visit again, we have a lot of requests for our handy helpers to fix problems that have been mounting up all year, which thanks to this vital funding we’ll be able to support with.

“Handy helpers will do all sorts of jobs around the house. They might be moving furniture to help someone move around their home more easily or to make space for adapted equipment. Even small jobs like changing lightbulbs, putting up curtains or re-tuning televisions make a huge difference to people’s health, wellbeing and dignity.”

Despite the relatively small size of the charity, it is well regarded among the people of Manchester, with approximately 6,000 people using its services every year. Residents who need support are referred to the charity from other organisations in the area, as well as from GPs and through word of mouth.

Launching Manchester Year of the Child 2022 – a year of opportunity and a...