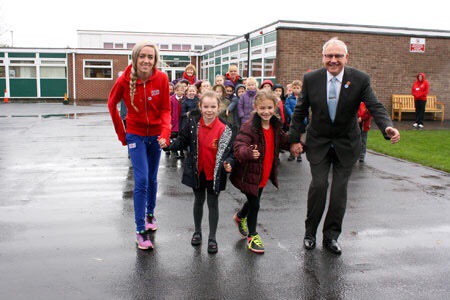 Pupils from 30 Tameside primary schools are now taking part in the borough’s Smile for a Mile programme – based on the national Daily Mile scheme which encourages children to walk, jog or run a mile a day to help increase self-esteem and confidence while improving wellbeing, behaviour, social skills and mental and physical fitness.
And to celebrate the success of the scheme, Team GB and Olympic athlete Eilish McColgan visited St John Fisher RC Primary School in Denton to run a mile with the pupils.

The middle- distance runner, who represented Great Britain in the 2012 Olympic Games in London and the 2016 Olympic Games in Rio, will also hold a running materclass for the school’s cross country club.

St John Fisher was the first school in Tameside to take up the Smile for a Mile programme, delivered by Tameside Schools Sports Partnership. Every day, rain or shine, Year 3 pupils spend 15 minutes walking, jogging and running laps of the playground to clock up the miles in addition to their normal PE lessons and playtimes.

Class teacher Angela Taylor said: “The children love it, when it’s time to go out they jump up from their desks with huge smiles of their faces – even those who are not the most sporty really enjoy taking part. Everyone goes at their own pace and collects a lolly stick for every lap they complete – seven sticks means they have achieved a mile and we record it all on a chart back in the classroom.

“The fresh air and exercise reinvigorates us all and makes everyone alert and ready to learn. It has been so successful that we plan to extend it to other year groups so that more pupils can benefit.”

Tameside School Sports Partnership Development Manager Emma Toone said: “We introduced the scheme in September after looking for ways that schools can help address inactivity in children. The take up has been amazing with nearly half of Tameside schools starting ‘Smile for a Mile’ this term and we hope for more to come on board in the near future.”

Tameside Council Cllr Dawson Lane, who is a member of Tameside Sport & Physical Activity Alliance, said: “Smile for a mile is a simple but effective way to improve not only the children’s fitness, but also their concentration levels, mood, behaviour and general wellbeing. I’m so pleased it already having such a positive impact for many Tameside schools and children. Well done to all involved.”