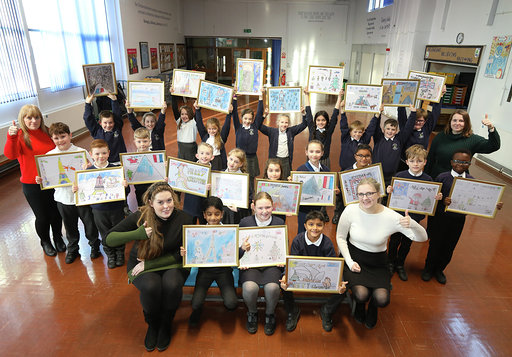 Four students at a local primary school have seen their festive artwork take off, with Manchester Airport set to feature their illustrations on its digital Christmas card.

Year 4 pupils at St Wilfrid’s C of E Primary School, in Northenden, were tasked with producing designs for the cover of the card as part of an art workshop.

Winners were selected this week and the finalised card will be shared with thousands of people across the globe. The card will also be displayed on Manchester Airport’s website, social channels and in its head office reception.

Winning artwork included a Paris-inspired sketch by Yohanan Praveen, 8, featuring the Eiffel Tower, the Tricolore, and Santa wishing the airport’s passengers and partners a ‘Joyeux Noel’.

An Australian-themed design by Karan Singh, 8, was also selected, with kangaroos steering Santa’s sleigh over the Sydney Opera House.

For their efforts, Hannah and Eden received early Christmas presents in the form of artwork kits, whilst avid Manchester City fans Yohanan and Karan were given the club’s own version of the board game Monopoly.

All children who took part were presented with a copy of their work in golden frames to proudly display at home, a pack of their Christmas cards to send to their loved ones, and a festive chocolate treat.

Lauren Smith, a Year 4 teacher at St Wilfrid’s C of E Primary School, said: “The wonderful staff at Manchester Airport have provided our children with many exciting opportunities that they otherwise may not have had. This has included days dedicated to learning about other cultures, such as a creative Spanish day and a maths workshop about calculating the cost of a holiday.

“The Christmas card competition really engaged the children – my class loved being involved with this and being creative. The prizes and resources that the children were provided with were fantastic and something which school would not have been able to fund otherwise.

“All of the children felt like they had achieved something special and they were all eager to learn more about other parts of the world.”

Helen McNabb, Community Relations Lead at Manchester Airport, said: “This competition really captured the children’s imaginations, they produced some fantastic designs and it was tough to pick the winners.