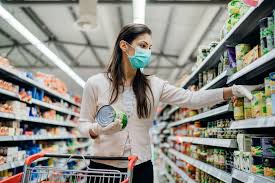 Policing minister Kit Malthouse said police would intervene in serious breaches of COVID rules in shops, but measures imposed and enforced by owners would be effective in most cases.

“The police are there if you like for backup if things get seriously wrong,” he told BBC News this morning.

“What we hope is that in the vast majority of cases the enforcement, or the reminders if you like, put in place by the store owners will be enough.”

Retailers called on the police to help enforce the wearing of masks to limit the spread of COVID-19 , with supermarket chains Morrisons and Sainsbury’s saying they would challenge people who were flouting the rules.

Malthouse also told interviewers that police officers are hoping the public will recognise what “local” means for exercise.

When asked whether “local” should be defined in England, he told Times Radio: “What we are hoping for is that most people will recognise that local, while it’s open to personal interpretation, does have some implications, ie can you get there under your own steam?

“We are trying to strike a balance between maintaining compliance with the rules and elements of public consent to what’s happening.

“I think most people would think that was reasonable.

“Where there are unreasonable people who are breaking that rule, police are intervening.”

Asked if longer cycling trips were within the rules, Malthouse told Sky News: “Yes. And what we’re asking people to do is when they exercise to stay local, now local is obviously open to interpretation but people broadly know what local means.”

“If you’re (…) genuinely taking exercise and not going out for other purpose social purposes, then that seems perfectly reasonable.”

CCTV released as armed robbers targeted a shop in Hulme

Are you being watched? New play explores surveillance and state in The Studio at...