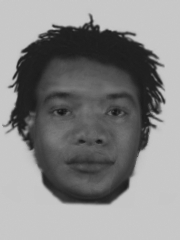 Police have released an e-fit image of a man they want to speak to in relation to a rape in Manchester.

The girl in her teens attended a property with friends on Shudehill in the early hours of  Monday 6 April, where a man raped her.

The woman was able to flee the scene. The offender left the scene at around 6.30am.

The offender is described as mixed race, 6ft 2ins,  of medium build with brown hair in twists.He is believed to have links to the South Manchester area.

Detective Constable Michael Jimenez of, GMP’s City of Manchester Division, said: “Thankfully, the woman was able to flee from the man but has been left very shaken and upset by the incident. She is now being supported by specialist services.

“We would like to take this opportunity to appeal to anyone who might be able to help us identity the man in the e-fit image to contact police as soon as possible. Do you recognise this man? Were you in the area at the time and did you see him?”