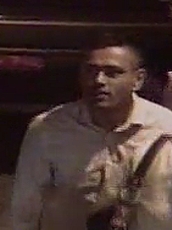 Officers investigating a homophobic attack on a man in Oldham last November have released CCTV images.
The attack happened in the early hours of Saturday 5 November 2016, outside a club on Yorkshire Street, Oldham Town Centre.

A 21-year-old man was in a club with his partner when an altercation ensued between himself and three other people.

Following this, two men were ejected from the club.

The victim then went outside with his partner for a cigarette, where the altercation that began in the club continued before he was repeatedly punched in the face and had homophobic abuse hurled at him.

A short time later, the victim was walking along Yorkshire Street when a further confrontation ensued.He was taken to hospital with facial injuries.

Officers have released CCTV images of two men they want to speak to in connection with the incident.

One of the men is described as white, aged between 20 and 25-years-old and was wearing a blue t-shirt.

The other man is described as Asian, between 5ft 8in and 5ft 9in and also aged between 20 and 25-years-old. He is of a chubby build and was wearing a shirt.

Police Constable Laura Cheetham of GMP’s Oldham Borough, said: “We have been carrying out our enquiries for more than two months now but need the public’s help to make further progress.

“I’d encourage anyone who recognises the men in the CCTV images or the description of the men who were in the area at that time, to get in touch with us.”

“We take reports of hate crimes extremely seriously and I’d like to stress that it will not be tolerated on the streets of Greater Manchester.”

Mayor of Greater Manchester calls for Cobra to be reconvened with seats for the...

Transport for the North pleads for Northern Rail and RMT Union to end train...