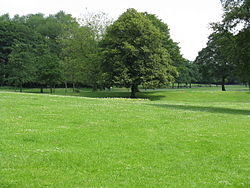 A 41-year-old man remains in hospital with serious injuries to his head and arms after being attacked yesterday evening in Buile Hill Park in Salford by two men with axes.

The two men, who were wearing balaclavas, attacked the man as he was walking through the park with his dog before jumping over some railings and onto Weaste Lane as they fled the scene.

The targeted attack is believed to be an isolated incident.

Detective Sergeant Paul Davies, of GMP’s Salford borough said: “We know this incident has caused a lot of concern to local people who have heard the news however I would like to say that we believe this to be a targeted attack, with no further threat to any other members of the public.

“There are numerous lines of enquiries that we are currently following up this morning but every piece of information that we receive helps us build a better picture about exactly what happened and who may be responsible.

“With that in mind, I would like to appeal to anyone who has any information at all to please come forward.

“This was a totally unprovoked and brutal attack on a man as he walked his dog through a popular park and we believe there could have been a number of witnesses who may have seen something.”