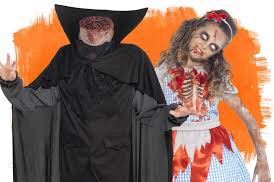 Parents and carers are being called upon to make children’s Hallowe’en costumes safer.
Greater Manchester Fire and Rescue Service (GMFRS) has written to politicians calling for the costumes, which are currently classified as toys, to be tested to the same strict fire safety standards as night wear – and it is now calling on parents and carers to do the same.

A flammability test was conducted for 12 of this year’s Hallowe’en costumes from leading retail outlets.A firefighter used a standard household lighter to start the test and out of 12 costumes, nine were engulfed with flames within seconds.

The test comes a year after the Chief Fire Officers Association (CFOA) launched its campaign to change the safety standards of children’s fancy dress costumes.

Firefighters are now calling on parents to use battery powered tea lights instead of candles in their pumpkin lanterns this Halloween.If a costume does catch alight – stop drop and roll.

Chair of Greater Manchester Fire and Rescue Authority, Councillor David Acton, said: “We understand that children want to get dressed up and have fun at Halloween.

“The best way to keep your children safe while they’re wearing these costumes is to keep them away from naked flames.Often these costumes are made from synthetic fabrics, which catch light easily and then melt causing life changing burns.

“Despite CFOA’s campaign last year our test shows that these costumes still catch fire too easily. If these costumes were subject to the same fire safety standards as night wear children would be safer.”

New statistics shows the North West has the highest proportion of people who are...