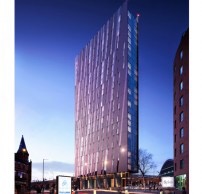 Plans are going before the council this week for a twenty seven storey building in the centre of Manchester.

Back in 2007 permission was given for a seventeen storey tower on the same site but work was disrupted by the financial crash, although preparatory work was begun.

The developers, Property Alliance Group, also have plans for the provision of a 7.25m x 30m media scheme which would blast adverts out across the area but that would still need advertisement consent and says the plans would be switched off at unsociable hours, and the screen would be programmed to reflect the facade design when the screen is not in use.

According to the report submitted to the council’s planning committee, the proposal would deliver a range of good quality apartments and would complement the existing residential community in the City Centre and contribute to the plan to grow the population of the city centre by hundred thousand by 2030.

The development they say will also add a positive element to the Manchester skyline and would serve as a place making landmark in this key location.