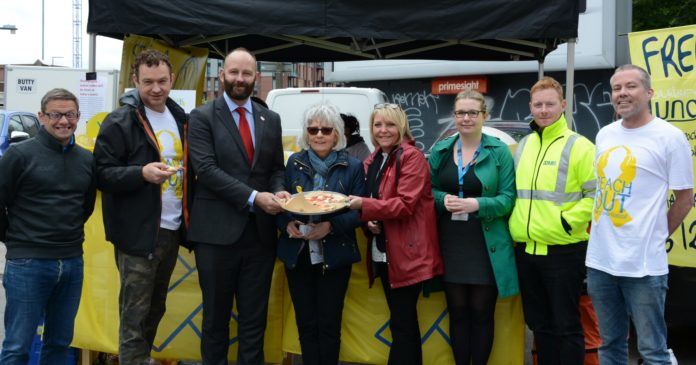 Pizza power could be the next weapon in the fight against suicide.

Salford mental health charity START will be touring building sites in Salford offering free ‘builder’s lunches’ in a bid to get construction workers talking about mental health and suicide.

Men in the construction industry face the highest risk of suicide. According to national statistics they are three times more likely to take their own lives than the national average.

The free lunches and chats are part of START’s Reach Out; Start to End Suicide campaign which seeks to raise awareness of the issue and the support available. Across Greater Manchester over 200 people a year take their lives, three quarters of them men. Salford and Bolton have the highest rates of suicide in Greater Manchester with 31 lives being lost in each locality in 2017 according the Office of National Statistics.

Dennis Baldwin from START said: “The pizza and free lunches are great ways to break the ice and get men talking about mental health. We need to break down the stigma that stops construction workers reaching out for help for themselves and for others.”

City Mayor Paul Dennett, who is backing the campaign, said: “Even one life lost to suicide is one too many. Salford is experiencing incredible levels of construction right now so I’m very pleased START are reaching out to building site workers in this way to show them support is there and they are being strong if they reach out for it.

“People’s minds and bodies are linked and we need to be as comfortable talking about mental health as we are physical health. This is a great step in that direction.”

Dr Tom Tasker, Chair of Salford CCG who funded the project, said: “Starting conversations with construction workers about mental health and suicide is so important. I’m pleased that the CCG is giving money to START through the innovation fund to run this great project and hopefully this will make an important contribution towards our ongoing work around suicide prevention.”

16,000 people remain undiagnosed with Hepatitis C in the North West