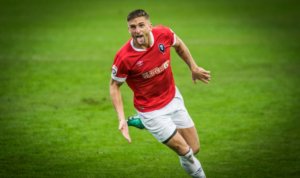 Salford City striker Mike Phenix has left the club to join Southport for an undisclosed fee.

He made over 80 Salford appearances and had 27 goals under his belt.

Mike made his Salford debut on the opening day of the 2016-2017 when Gloucester visited Moor Lane, The Ammies’ first ever National League North fixture would finish 0-0 but ‘Pheno’ was soon on the goal trail.

He scored in each of the next 5 matches, including a winner against local rivals FC United of Manchester. Sixteen goals were recorded over a campaign that ended in play-off disappointment but Mike has the consolation of finishing club top scorer. He made a vital contribution during the 2017-2018 title winning season too, notching 11 times

Curzon Ashton to let Bury fans in for free this weekend