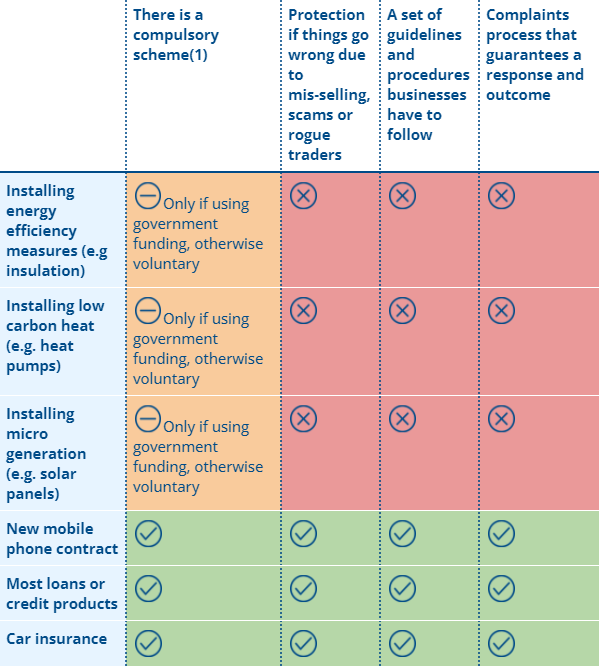 People taking out a mobile phone contract, car insurance or getting a loan have far better consumer protections than those spending thousands of pounds installing green technologies in their home. This is according to new research released today by Citizens Advice.

The charity analysed the consumer protections across a range of products and services, including mobile phones, insurance and pensions, against installing green technologies like heat pumps or solar panels. It found a worrying gap.

With the installation of some low-carbon technologies needing to ramp up by more than 2000% in the next four years to meet the net-zero target, Citizens Advice is calling on the train government to make sure consumer protections catch up with the technology.

Installers of heat pumps, insulation or micro-generation currently only have to join a mandatory scheme if government funding is involved. Even then, there are no protections if things go wrong due to mis-selling, scams or rogue traders; there’s no guidelines for installers; and there’s no complaints process that guarantees an outcome. These things are standard practice for consumer purchases, like taking out a phone contract or loan.

Heat pump installations need to rise by 2200% to meet target

The charity’s analysis shows that the installations of some green technologies will need to rise significantly if the government is to hit its net-zero targets.

To meet these ambitious goals, a straight-forward and comprehensive package of consumer protections will be key for people to be confident in investing the significant sums needed to make their homes fit for the future.

To support the once-in-a-generation challenge of retrofitting 29 million homes, Citizens Advice is calling for a single accreditation and inspection scheme for anyone installing green home technologies.

A single body should have the power to both audit providers and prevent a company that falls below standards from operating; and set clear, enforceable consequences if companies break the rules.

This follows the example of financial services in which nearly all activities must be authorised by the Financial Conduct Authority.

“If the government wants to hit its net zero by 2050 target it’s going to need to make it as easy as possible for people to make changes to their homes. Right now it’s confusing and complex with people not knowing where to start finding a decent installer.

“People need to know how to find a trustworthy installer and that they’ll be protected if things go wrong. Establishing a single mandatory scheme is a key way in which the government can support the public to meet this once-in-a-generation challenge.”