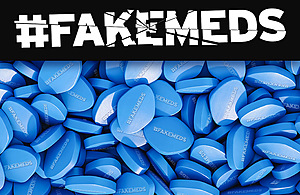 Around 3.5 million unlicensed erection pills worth more than £10 million were seized in the UK in 2019 according to new figures released today by the Medicines and Healthcare products Regulatory Agency (MHRA).

Erectile problems in general affect up to 21% of men in the UK, which is equivalent to 4.3 million men in the UK. Despite this, it has been found that 44% of men with ED aged 40 and over have not sought medical help and may be buying fake products online.

Fake ED drugs can lead to more than just a let-down in the bedroom. There is no way of knowing what is in them nor the negative health effects they can have. Whilst it might seem appealing to skip the need for an assessment from a healthcare professional by buying medicines online, men with erectile problems may be putting their health at risk. Fake medicines may not contain any active ingredients, or worse, may contain toxic ingredients which could lead to serious health consequences.

The MHRA’s enforcement team has worked with UK Border Force to seize millions of unlicensed medicines at the border. Often illegal traders pose as legitimate suppliers, selling medications that are unlicensed for the UK market and offering tempting prices lower than the real deal. Since the launch of the #FakeMeds campaign in 2016, the MHRA has been continuing to crack down by closing illegally operating sites selling unlicensed products.

More than half of all medicines and medical devices bought online are fake or counterfeit, highlighting the need for enforcement activity and public awareness to protect and improve the UK’s public health.

With this new phase of #FakeMeds the agency is using the campaign to encourage people who buy medication online to make sure they are purchasing from safe and legitimate sources. It also encourages people to report suspected dodgy ED drugs, and any side effects experienced to the Yellow Card scheme

Fake ED drugs might not give you the result you want or even make you ill. Any medication bought from an unregistered website may be fake and will not meet quality and safety standards. We encourage people not to take a chance with fake medicines – make sure you are buying from a legitimate source.

Fear of crime and of parents struggling to pay the bills blights our children’s...