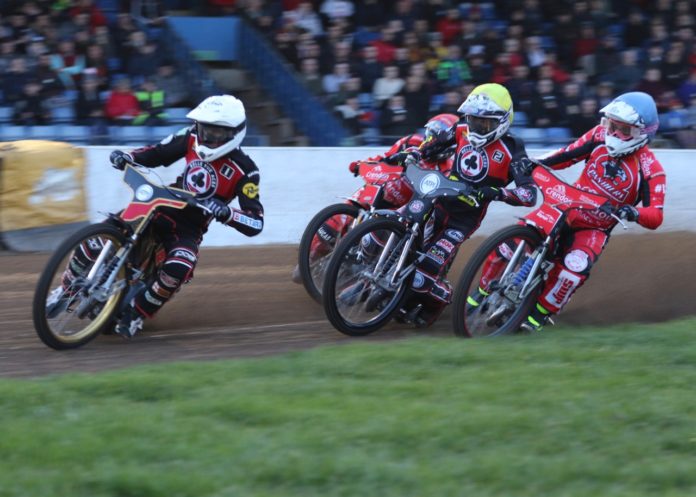 Belle Vue kicked off their Premiership Supporters’ Cup in fine style after a 42-48 victory at the East of England Showground, with both Kenneth Bjerre and Max Fricke picking up maximums.

The visiting Aces started strongly with skipper Fricke breaking the East of England Showground track record in a phenomenal time of 57.9 seconds in his first appearance of the night.

They followed up with a stupendous 5-1 from the young reserves Jaimon Lidsey and Dimitri Bergé to put Belle Vue 6 points clear after just two races and leaving their hosts hot under the collar.

Although the Panthers managed a brief response, the Rentruck Aces continued to dominate into the final stages with Fricke and Bjerre taking the chequered flag in Heat 15.

On their first win of the season, Bjerre said: “It’s good to get the first one out of the way. Peterborough pushed us all the way, so we couldn’t get too comfortable, but it was good win.

“There was a good team spirit amongst the guys. Everyone was pitching in and helping out, and it was great to see so many of our supporters had travelled down for our first meeting.

“It’s a long season ahead and a few of the guys just need to get back into their routine. Obviously, Dan [Bewley] has been out for over 6 months so it’ll take us some time to break everybody in.

“We just need to be patient and I’m confident they can do what we need them to do. It’s a relief to go into our first home meeting with a win under our belt so here’s hoping for more of the same.

The Rentruck Aces return the compliment with a visit from Peterborough on Thursday, April 4 at the National Speedway Stadium. Tickets available online at www.bellevue-speedway.com

A point hard earned for the Aces

Master of the elements