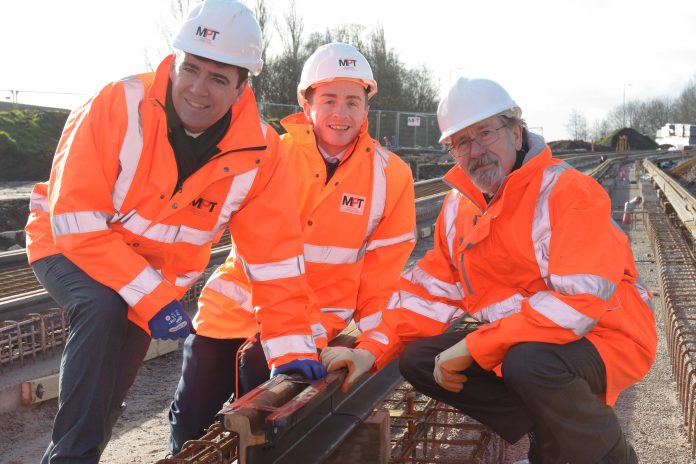 This week marked a major milestone for the much anticipated £350m Metrolink Trafford Park Line scheme as the first piece of track was laid at Parkway Circle.

It’s the city region’s first major project to benefit from the ground-breaking Devolution Deal, signed by Greater Manchester leaders and central government, in November 2014. The deal provides earnback funding of up to £900 million over 30 years and has provided funding for the £350 million Trafford Park Metrolink line as part of a joined up transport network right across the city region.

Mayor Andy Burnham, said: “Improving public transport in Greater Manchester is a top priority for me. By extending Metrolink to some of the busiest visitor attractions in Greater Manchester, we can give people a real alternative to driving and help reduce traffic congestion.

“The Trafford Park Line is one of the first schemes to benefit from Greater Manchester’s devolution agreement and it is great to be here and witness this major milestone and the first piece of track being laid.

“Metrolink plays a pivotal role in connecting people to job, leisure and retail opportunities and this extension through Europe’s largest trading estate to Event City and intu Trafford Centre will only enhance this further.”

Leader of Trafford Council, Cllr Sean Anstee, said: “Trafford Park and areas around the Trafford Centre are vitally important to our local economy; they provide tens of thousands of jobs, attract hundreds of thousands of visitors and help to deliver continued growth, investment and regeneration, so I can’t emphasise enough the importance of this scheme.

“To witness the first piece of track being laid here at Parkway Circle is a great achievement and a real sign of progress for what will be a key tram service for the people of Trafford and far beyond.”

Chair of the TfGM Committee, Cllr Andrew Fender, said: “Following the recent major expansion of the Metrolink network and completion of the second city crossing, it’s great that we have been able to maintain the momentum with building the Trafford Park line. It’s ever more important for TfGM to provide sustainable public transport alternatives to better serve our communities now and into the future.”

Construction work began in late 2016 and the new line is due to open in 2020. Services will run from intu Trafford Centre through Manchester city centre to an improved stop at Crumpsall.

For more information about the Trafford Park Line, you can visit https://www.tfgm.com/trafford-park-line

Stage is set for Gracie Fields statue unveiling this weekend