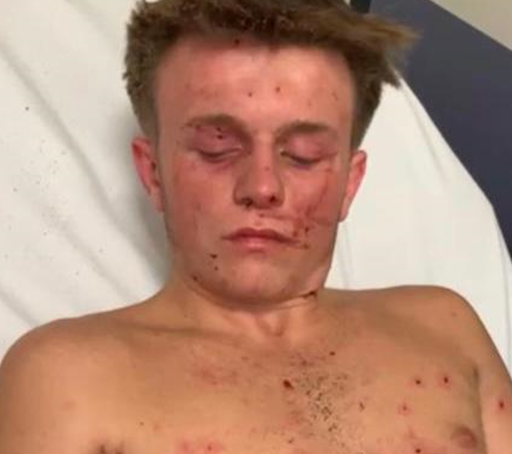 A teenager who suffered devastating injuries from a firework which exploded in his hand has urged others to stay safe in the run up to Bonfire Night.

Rio Diveney, from Oldham, has spoken about his ordeal as part of Greater Manchester Fire and Rescue Service’s (GMFRS) ‘Bang Out of Order’ campaign.

The 16-year-old was with a friend in the area on Friday 22 October when he was handed a firework – believed to be an ‘onion bomb’ or industrial style firework – to light. But the firework immediately went off, knocking him unconscious.

Rio said: “One of my friends said he had this firework, he brought it outside, I thought it was just a normal firework. I took it to the corner of the street went to light it and it just blew up, it didn’t make the normal noise a firework would.”

Friends rushed Rio to Royal Oldham Hospital where he was found to be suffering from a deep gash to his hand, as well as burns to his chest, arms and abdomen. He was later transferred to Wythenshawe Burns Unit for further treatment. Doctors placed pins in his hand and a stitch to his chest.

The teenager is undergoing weeks of physiotherapy before he will get full use of his hand back and is currently unable to attend college.

Rio added: “I can’t do things – my dad has to help me do everything. I am right-handed, it’s stopped me from doing most things. I have been very lucky, doctors have said I could’ve lost my first finger, my thumb, they said it could have been my face. It could have been my heart where my stitches were – it could’ve been a lot worse than it was.

“If anyone brings you a firework, just think twice and say no because this is what can happen.”

Ricky Diveney, Rio’s dad, said: “It has been hard, he can’t do his everyday things. He went to work, joinery and loved it – he can’t do that for a good few months.

“I would say don’t mess with fireworks. Go to a show, watch them at a show, if anyone offers you a firework don’t take it because this shows just how easily it can happen.”

The incident comes as GMFRS urges the public to stay safe on Bonfire Night as part of this year’s ‘Bang out of Order’ campaign. GMFRS, alongside partner agencies including Greater Manchester Police (GMP) and North West Ambulance Service (NWAS), is calling on the public to think carefully about their actions and support the emergency services to keep the public safe.

People are advised to go to organised firework displays but if you are having fireworks at home, buy them from a licensed retailer and follow the Firework Safety Code.

Val Hussain, GMFRS Group Manager for Bury, Oldham and Rochdale, said: “Every year we see a number of people, including children, injured through the misuse of fireworks and sadly we have seen it happen again in recent weeks.

“Our advice would be, if possible, go to an organised bonfire and fireworks display, and if you are doing this, please don’t forget to keep up with all the COVID-19 measures. If you are going to use fireworks at home, then please follow the firework code and that starts with making sure the fireworks have the CE standard mark on them.

“Fireworks can be enjoyable but can also be extremely dangerous if not used correctly.”