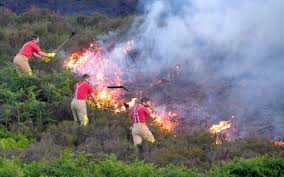 A year on from devastating moorland fires in Greater Manchester,Oldham and Tameside Councils are looking to ban fires and barbecues on the moors above the two local authorities.

Residents are being asked for their views on the introduction of two Public Spaces Protection Orders (PSPO) to cover an area that straddles both local authorities.

Under the terms of the orders people will be banned from taking barbecues, fireworks and sky lanterns into the area.

If the PSPOs are introduced anyone found to be breaching the terms of the orders would be committing an offence and would be liable to a fixed penalty notice of £90 or prosecution through the court.

Failure to pay any fixed penalty amount could also lead to prosecution.

There are exemptions for private residential areas but any land that has a public right of way or public access is included in the proposed PSPO.

Signage will be put in place around the designated area to advertise the PSPO.

Councillor Arooj Shah, Deputy Leader of Oldham Council and Cabinet Member for Social Justice and Communities, said: “The moors above Saddleworth are home to some of the most beautiful countryside in England.

“Unfortunately, over the last few years several huge fires, some which have been started by discarded barbecues, have put lives and property at risk.

“We believe animals have died in the fires and it will take years for the moorland to return to normal.

“Fighting the fires also tied up resources that could have been needed elsewhere, in the process costing hundreds of thousands of pounds. That can’t go on.

“We aren’t trying to be killjoys – we want people to go out and enjoy our countryside and just to act responsibly. If they don’t then they could face action.”

Councillor Allison Gwynne, Tameside Council’s Executive Member for Neighbourhoods, said: “Although the 2018 fires were the worst in living memory, moorland fires are not uncommon. They take place every year, and there’s strong evidence to suggest that the vast majority are the result of thoughtless behaviour.

“I believe the PSPOs, used alongside education and information, would help us to significantly reduce the number of fires. They not only cause large-scale destruction but also needlessly endanger people and put a strain on already stretched services.

“Last year’s fires could so easily have resulted in tragedy. It was only the tireless efforts of so many firefighters, soldiers and others – as well as a hugely impressive community response – that ensured no lives were lost.”

Oldham and Tameside Councils are now set to carry out a formal consultation on the proposed PSPOs.

The consultation period will run from July 8 to August 5 and councillors, stakeholders and residents will be able to submit comments on the proposals.

Copies of the proposed PSPOs and Notices of Proposed Orders for Oldham and Tameside will be found on thewww.oldham.gov.uk/saddleworthPSPO and www.tameside.gov.uk websites from July 8.

Greater Manchester is Greener than we think