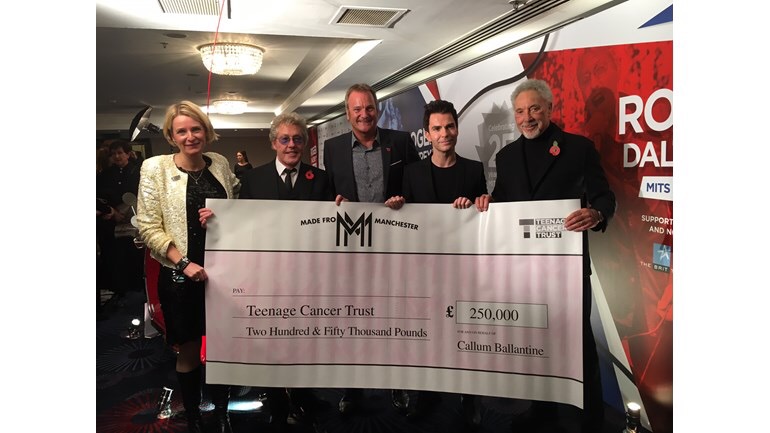 Manchester based Callum Ballantine who died of osteosarcoma in 2015 at just 19-years-old set up a fundraising initiative to support other young people living in the North West before, during and after cancer treatment.

Initially selling ‘Made From Manchester’ tee shirts, Callum’s initiative was taken up by friends, families, school, university and more resulting in a phenomenal £250,000 being raised for Teenage Cancer Trust.

The Made From Manchester tee shirts were launched in November 2015 and with the exposure given to them by the likes of Noel Gallagher and Manchester City FC warming up on a match day in them, Callum and business partner Samir Kamani presented a cheque to Teenage Cancer Trust for £20,000 within a month of launch.

Callum then set an ambitious target of £100,000 and wanted David Beckham and others to join the campaign. He achieved both targets and so much more.

Callum had signed up to climb Mount Kilimanjaro for charity prior to his diagnosis so on his passing his brothers Lewis, Owen and Finn vowed to take his ashes to the top of Africa’s highest mountain.

A total of 19 undertook the Trek in August, Callum’s best friends and family, and this became the focus of a fundraising drive. Others joined the initiative and soon there were football matches, cycle challenges, marathons, cake sales and so much more all being supported by a huge North West community.

Callum’s mum, Beth Ballantine, said: “Cal lived life to the fullest and was always a very social and kind hearted individual. He would be so proud of the number of people who supported the fundraising and totally blown away by the total raised. As a family we are so incredibly proud and it’s such a monumental legacy that hopefully will help other teenagers facing cancer”.

Siobhan Dunn, Chief Executive of Teenage Cancer Trust, said: “Cal showed amazing determination and positivity, which continues to inspire so many people. His family, friends, and the community in the North West have all continued to fly the flag for Cal’s legacy and the funds raised in his honour will make a huge difference and help other young people with cancer in the region.”

“Cal inspired so many people in the North West to fundraise and help us support for teens and young adults with cancer. It has been incredible to see the community in the North West, coming together so closely to help improve the lives of young people with cancer. Every penny raised will make the vital work of Teenage Cancer Trust possible – we’re hugely grateful for all the community’s support.”

The Made From Manchester tee shirts have become cult fashion around Manchester and beyond with celebrities such as David Beckham, Liam Gallagher and more all supporting the brand. Alice, Jamie, Jonnie, Luke, Matt and Zach are brand ambassadors and have been a driving force over the last twelve months. They have a few ambitions and surprises in store for Made From Manchester followers in 2017.

Those wishing to make a donation in Callum’s memory can visit www.justgiving.com/Calimanjaro or buy a ‘Made from Manchester’ t-shirt at www.madefrommanchester.com.