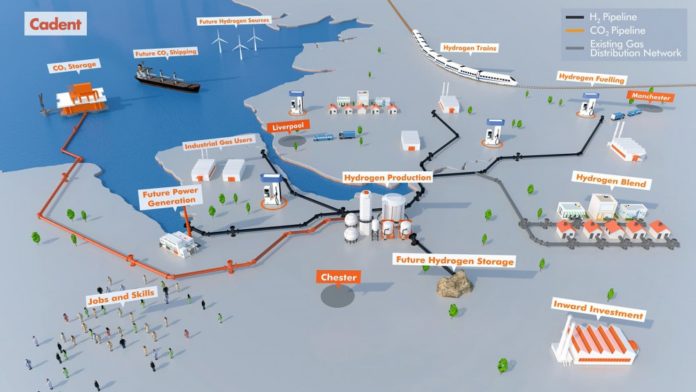 As climate change protests take place across London last week, attendees to a Westminster briefing heard how HyNet will initially save one million tonnes of carbon dioxide (CO2) emissions every year (rising to up to 10 million tonnes per year), creating a replicable model for the rest of the UK and beyond.

HyNet could see hydrogen injected into the existing gas network across Manchester, Liverpool, Cheshire and Warrington, helping to decarbonise homes and businesses. It would also see hydrogen supplied in new pipelines to major manufacturing and power generation sites reducing the carbon footprint of industry while safeguarding jobs and delivering clean growth.

The HyNet consortium is led by one of the North West Hydrogen Alliance’s (NWHA’s) newest members – Progressive Energy – with founding members Cadent and Peel Environmental also involved along with various other members.

Dave Parkin, Director at Progressive Energy said: “To achieve our national target of Net Zero emissions by 2050 it is essential that we develop a hydrogen economy in the UK. HyNet is a real project, with real partners undertaking real engineering which can start delivering CO2 savings within the next five years.

“Why are we in the North West? The region has unique geology, with salt caverns that can be repurposed for hydrogen storage, and depleted gas fields in the Irish sea that can be used to store CO2. The region also has a strong industrial heritage and existing skilled workforce which make it the obvious choice.”

Ed Syson, Chief Safety and Strategy Officer, Cadent said: HyNet is game-changing – achieving huge reductions on carbon emissions by 2024, just five years from now. It is a massive step in the UK’s journey to Net Zero. Keeping our homes warm using the similar appliances we use today, fuelling trains, buses, lorries and potentially even some cars, and powering industrial processes in a way that simply would not be achievable by relying on green electricity alone. To think otherwise, is just not realistic.

“We need a true energy mix to be sustainable – and to be realistic in opting for a future that takes advantage of multiple clean energy sources, like hydrogen, to get us to Net Zero. This hydrogen project is based in North West England and driven by North West political and industrial support that wants to see it happen. It ticks all the boxes.”

Professor Joseph Howe, Chair of the NWHA and Executive Director of the Thornton Energy Institute at the University of Chester, said: “HyNet is a transformational project that will establish the North West as the leading region in hydrogen. We have the industry, infrastructure and innovation to make this a reality and we are ready to deliver.”

Mark Knowles, Head of Energy, Liverpool City Region Combined Authority, said ““We recognise not only the huge carbon reductions that the project would deliver, but the clean growth opportunity is massive in terms of job creation from safeguarding existing business and attracting new companies to the area. Our own projects also complement HyNet; by supporting hydrogen transport infrastructure we are effectively paving the way for more extensive roll-out of fuel cell vehicles which will deliver significant carbon benefits but also improve local air quality. HyNet also presents an opportunity for our flagship Mersey Tidal barrage project, which can in the future supply green hydrogen to the pipeline network deployed for HyNet.”

HyNet was awarded a total of £1.6M grant funding under UK Government Competitions for CCUS, Hydrogen Supply and Industrial Fuel Switching earlier this year to further develop the engineering solution for the project. The consortium is bidding for further funding to support the next stage of the project. The partners involved in HyNet include Progressive Energy, Cadent, CF Fertilisers, Essar, Peel, Johnson Matthey, SNC Lavalin, Unilever, NSG Pilkington and the University of Chester.

HyNet is a key proposition underpinning the North West’s bid to become the UK’s first low carbon industrial cluster. The North West Energy and Hydrogen Cluster is being led by the North West Business Leadership Team, with support from Greater Manchester and Liverpool City Region Mayors and the Cheshire & Warrington LEP. The Cluster could deliver 33,000 jobs, over £4bn investment and save 10 million tonnes of CO2 per year.