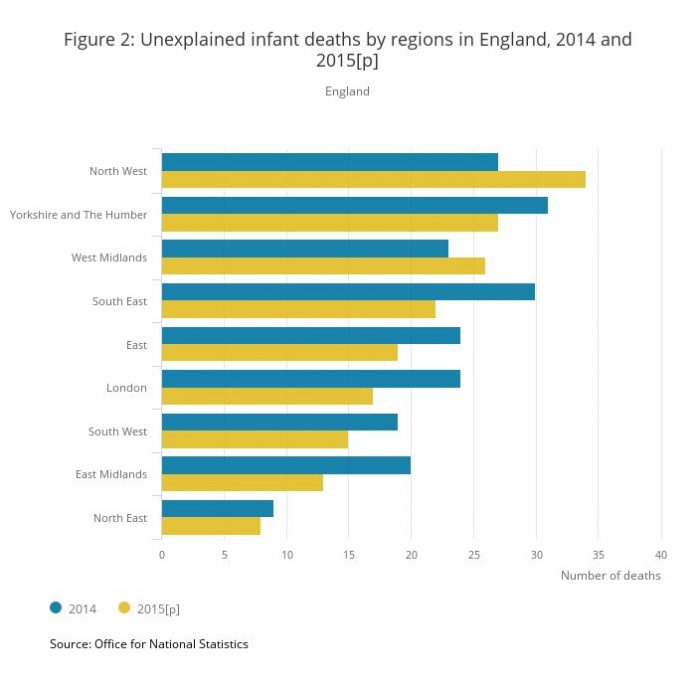 The number of unexplained infant deaths has decreased in all regions in England in 2015 apart from in the North West and the West Midlands, where they increased by 25.9% and 13.0% respectively according to figures out today.

Deaths under 1 year of age including both sudden infant deaths, often called “cot deaths”, and deaths of undetermined cause, with associated risk factors.

There were 191 unexplained infant deaths in England and Wales in 2015, with a rate of 0.27 deaths per 1,000 live births, this follows the decreasing trend that has generally been seen over the last decade.

This decrease could be driven by the advice and guidance that is available for parents from the NHS, Welsh Government and The Lullaby Trust. Since 2015, The Lullaby Trust has held an annual awareness Safer Sleep Week Campaignpromoting safer sleep advice, whereby a number of health authorities participated further driving public awareness.

The Lullaby Trust have also trained health professionals working with new and expectant parents in safer sleep practices and advice they can pass onto parents.

“Unexplained infant deaths in 2015 were the lowest on record, driven by a further decrease in sudden infant deaths from 2014. This could be due to a greater awareness of safe sleeping practices and a reduction in the number of mothers smoking during pregnancy.” says Vasita Patel, Vital Statistics Outputs Branch, Office for National Statistics.