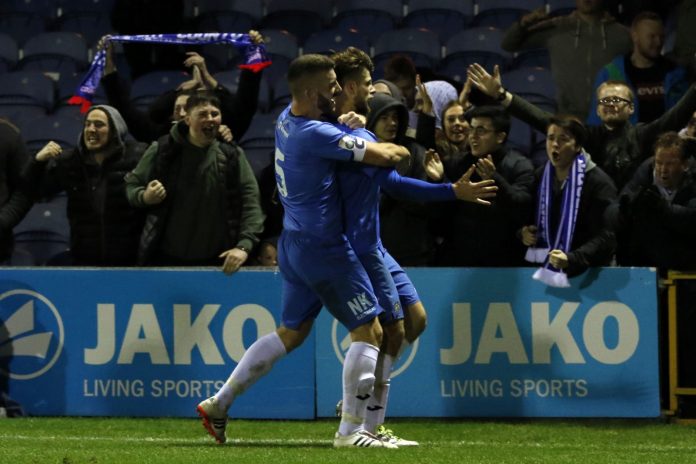 Salford City kept their lead at the top of the Conference North with a 4-0 win over bottom club North Ferriby at Moor Lane, Jack Redshaw hitting all four goals in the second half against a Ferriby side who have still only won once this season .

Two penalties at Nuneaton saw Curzon Ashton come away from the Midlands with a point.Ashley Chambers converting for the home side in the eighteenth minute but The Nash pulled back on level terms just shy of the hour-mark through Niall Cummins.

Stockport County secured a point deep into stoppage time for the second Saturday running, as a 93rd-minute equaliser from Jason Oswell cancelled out a controversial opening goal at Edgeley Park ten minutes earlier which saw Haughton put the visitors in front.

Into the Evo Stik Premier and Altrincham stay top after a comprehensive 4-0 at Sutton Coldfield, having cruised into a 3-0 lead inside eleven minutes at Coles Lane.

It was the late goals show at Hurst Cross where two injury time goals saw the points shared with Barwell as the hosts Ashton finished the game with just nine men.

Danny Pilkington must have thought he had secured all three points for Ashton sending Liam Castle the wrong way from the spot but with the Robins desperately trying to hold on, Barwell’s most effective forward Matthew Stenson made space and curled home a fine effort with virtually the last kick of the game.

In Division One North Hyde United fell to two Kurt Willoughby goals at Clitheroe while Droylsden found themselves four goals down at leaders South Shields eventually going down 6-1 on Tyneside.

Radcliffe Borough shared the points in a 3-3 draw at Colne, the home team snatching a dramatic equaliser deep into injury time.Radcliffe had twice lead in the match,James Hooper and Jake Moran scoring in the first half and Hooper getting a second on the hour mark to give Boro a 3-1 lead before Ollie Crankshaw gave the home team hope and substitute Oliver Wood levelled in the ninety four minute.

Mossley had a day to forget crashing 5-0 at Colwyn Bay, two goals each for Jack Hindle and Daniel Bartle saw the North Wales club home with a third of the game still to go.

Finally Trafford stretched their unbeaten league run to eight games with an excellent draw at Scarborough.Declan Ryding cancelling out James Walshaw’s opener for the home team