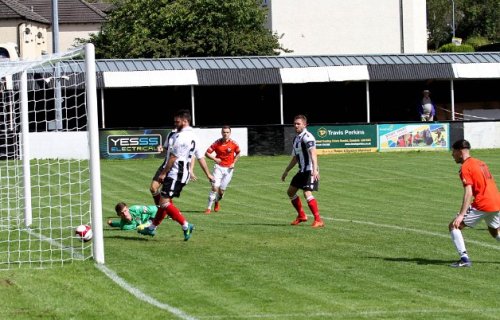 Goals from Jake Beesley and Mike Phenix earned a second away win of the week for Salford City in front of 1,300 Spectators at Telford’s New Bucks Head.

Beesley opening the scoring after just nine minutes but the Ammies leaving it until there was thirteen minutes left to make sure of all three points.

Simon Ainge had scored twice within six first-half minutes for the visitors,two goals after the interval for Jason Oswell stopped the league leaders,who had won their first two games without conceding from making it three from three.

Curzon Ashton earned a point at Charley’s Victory Park in a 1-1 draw. The Nash took the lead on  nine minutes through Joe Guest, The Magpies levelling on 28 minutes, Scott Leather capitalising on some poor defending from a free kick.

it was the opening day in the Evo Stik league and all eyes were on Altrincham and Stalybridge, relegated last year.

The two had contrasting fortunes.Bridge beating one of the favourites Nantwich Town at Bower Field thanks to a solitary first half goal from Alex Honeyball, but Alty continued where they finished last season, crashing 3-0 at home to Stafford Rangers, manager Phil Parkinson describing the defeat as sickening after the Robins had dominated for the first hour.

Meanwhile Ashton United came away with a point at Hednesford’s Keys Park ground, Matthew Chadwick putting Ashton in front on 26 minutes, a Danny Glover penalty before half time levelling it up for the Pitmen.

One division below and in the game of the day, Trafford lost at home to league favourites South Shields.Carl Finnigan scoring the winner in the second half, before being sent off in stoppage time after an altercation with a member of Trafford’s coaching staff.

Earlier Trafford had taken the lead six minutes before half time through James Dean before Jon Shaw headed in a minute into first half stoppage time.

Both Radcliffe and Droylsden also ended the first day pointless, a Matt Lawler goal in the latter stages of the game sending Bamber Bridge home with the three points after Macauley Wilson had put the visitors in front on the half hour mark, Kurt Sherlock levelling for  Boro minutes later.

Droylsden meanwhile fell to a goal in each half at Clitheroe’s Shawbridge stadium, Sefton Gonzales and Kurt Willouby the scorers.

Mossley were the only team in the region to win and did so emphatically with a 5-2 defeat away at Kendal.The Lillywhites coming from behind after Jack Touhy’s opening goal had been cancelled out by Connor Gaul and Aaron Taylor before half time.Second half goals from Touhy,Jack Latham, Sam Gibson and Mason Duffy completing the win.

Finally there were no goals as Scarborough christened their brand new Flamingo Land Stadium for the visit of Hyde.