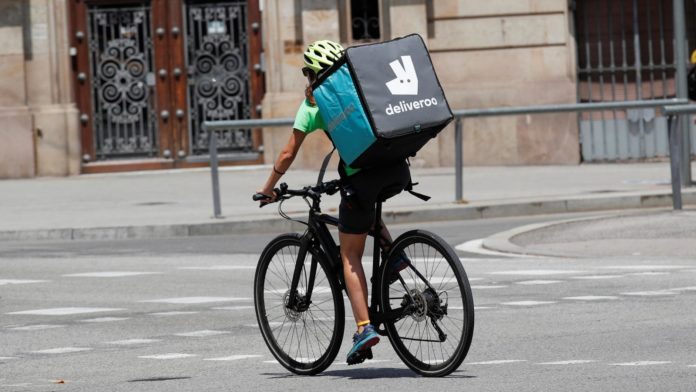 Deliveroo has today announced that tens of thousands of NHS staff will now be able to order a free meal on the app or website after the company’s campaign to feed the country’s heroic healthcare workers raised more than £1.5million.
Deliveroo has pledged to make 500,000 meals available to NHS workers in hospitals across the UK for free and announced that customers could donate towards this on the food delivery company’s app.
Now, after a staggering show of support from customers and corporate partners donating to the campaign, Deliveroo is extending the offer, allowing tens of thousands of NHS workers to order free meals to their homes on the app. This means Deliveroo will be providing NHS workers with free meals to both hospitals and homes.
From today, NHS workers will be eligible to receive a £20 voucher for Deliveroo, which will cover both the cost of the meal and delivery, so they are able to order from their favourite local restaurant and eat for free, up to a value of £20. 50,000 vouchers will initially be made available.
Deliveroo is able to do this thanks to the staggering kindness of its customers, who have given almost £500,000 for NHS heroes and vulnerable people.
In addition, corporate donors have also given generously to Deliveroo’s campaign. Lead corporate partner American Express joined forces to ensure Deliveroo is in a position to deliver all 500,000 meals for free to NHS staff in their workplace. Furthermore, American Express, alongside other corporate partners, including the Reuben Foundation, funded thousands of vouchers for NHS workers to enable them to order free meals to their homes.
Deliveroo has already delivered nearly 60,000 meals to NHS hospitals, including: St Mary’s Hospital London, Great Ormond Street Hospital, Trafford General Hospital in Manchester, UCLH hospitals in Euston Road and Queen Square and North Middlesex Hospital. The company has expanded its fleet of vans to do more large-scale deliveries to hospitals across the UK.
Food for delivery to NHS hospitals has been donated by Deliveroo’s restaurant partners, led by Pizza Hut, including others such as German Doner Kebab, KFC, Itsu, Burger King, Neat Burger, Bella Italia and others.
In total, the value of food donated to the initiative and the money raised from consumers and corporates amounts to over £3.5m.
Will Shu, CEO and founder of Deliveroo, said: “Whether to hospitals or homes, Deliveroo is providing NHS workers with free meals and we are incredibly proud to do so. This is just a small gesture of thanks for the enormous effort they are all making to save lives and protect us all.”