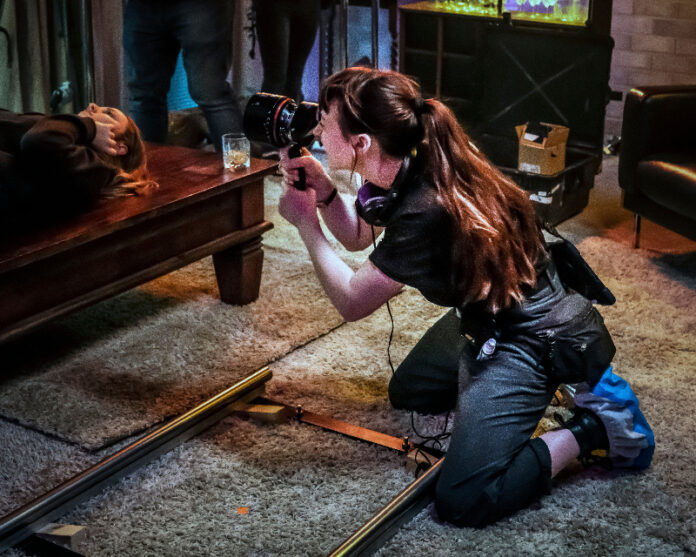 A new film season at HOME will celebrate the act of making films, from the power struggles and self-doubt via dark secrets and chaos to artistic triumph.

Jason Wood, HOME’s Creative Director for Film and Culture, said: “At a moment when cinemas have been closed for a protracted period and in an era in which streaming films has become commonplace, The Reverse Gaze is a reminder of the art and endeavour of filmmaking. It’s also a celebration of the physical screen space, a place where people come together, commune and better understand society.”

The process of making films, with its trials and tribulations, power struggles and self-doubt, has been a rich subject for numerous filmmakers, both established and emerging. The Reverse Gaze: Filmmaking on Screen will look at the act of creating images and more generally the process of artistic endeavour, offering along the way an analysis of the film industry and the personal struggles within it.

The season will open with Wim Wenders’ corrosive statement on the art of filmmaking, The State of Things, a powerful journey into the underbelly of the American film industry introduced by Jason Wood.

Armenian-Canadian director Atom Egoyan’s Ararat, with a recorded introduction from the director, is a highly personal statement about the forced march imposed in 1915 upon the Armenian people by the Turks of the Ottoman Empire, and the impact of the historical trauma which still reverberates with contemporary Armenian-Canadians living in Toronto.

Also in the season will be the 1960 classic exploration of voyeurism and violence Peeping Tom, and Fassbinder’s damming reflection on the process of filmmaking, Beware of a Holy Whore, introduced by Andy Willis, HOME’s Senior Visiting Curator: Film and Professor of Film at the University of Salford.

François Truffaut’s affectionate farce Day For Night is one of his most beloved films, with Truffaut himself appearing as the harried director of a frivolous melodrama, the shooting of which is plagued by the whims of a neurotic actor, an aging but still forceful Italian diva, and a British ingenue haunted by personal scandal.

Heart of Darkness: A Filmmaker’s Apocalypse is a documentary by Eleanor Coppola, who captured her husband Francis’s 238-day shoot for Apocalypse Now, objectively capturing things spiralling out of control in pursuit of a maverick vision. The only documentary in the season, it will be introduced by Dr Kirsty Fairclough, Reader in Screen Studies at Manchester Metropolitan University’s School of Digital Arts.

In Round Figure (inclusion TBC), veteran actor Sanjay Mishra features as a washed-up character actor from the heyday of Bollywood, realises that he ‘retired’ on the verge of a rare milestone – he had featured in 499 Hindi films. The screening will be introduced by Rachel Hayward, HOME’s Head of Film and Omar Ahmed, Curator of Not Just Bollywood.

Dolemite Is My Name, the story of Rudy Ray Moore featuring stand-out performances from Eddie Murphy and Wesley Snipes, is a celebration of black creativity introduced by Karen Gabay, radio presenter, and TV and podcast producer.

Also showing is Man With A Movie Camera (Chelovek’s kino-apparatom), the culmination of a decade of experiments to render “the chaos of visual phenomena filling the universe”. Dziga Vertov’s masterwork uses a staggering array of cinematic devices to capture the city at work and at play, as well as the machines that power it.

Olivier Assayas’s live-wire international breakthrough Irma Vep stars a magnetic Maggie Cheung as a version of herself: a Hong Kong action-movie star who arrives in Paris to play the latex-clad lead in a remake of Louis Feuillade’s classic silent crime serial Les vampires. What she finds is a behind-the-scenes tangle of barely controlled chaos as egos clash, romantic attractions simmer, and an obsessive director drives himself to the brink to realise his vision.

Beginning with an almost 40-minute single-take set piece that sets the tone for what’s to come, Shinichiró Ueda’s cult sensation One Cut of the Dead is a zippy, silly meta-comedy that’s stuffed with great, self-referential gags about making low-budget horror movies.

Finally in the season, there will be a special preview screening of Censor, set in 1985 where after viewing a strangely familiar “video nasty”, Enid, a film censor, sets out to solve the past mystery of her sister’s disappearance, embarking on a quest that dissolves the line between fiction and fact. This special preview screening will be followed by a Q&A with director Prano Bailey-Bond.

The season is the first to be announced following confirmation that HOME will reopen on 17 May if all goes to plan in the Government coronavirus roadmap.

Tickets will go on sale after the Prime Minister’s announcement on 10 May about Step 3 of the roadmap out of lockdown, which will confirm the reopening. Priority booking will be available to HOME Friends, followed by HOME members with tickets on general sale from 13 May. More information about how to become a HOME Friend can  be found online here.

All cinema seating will be socially distanced, meaning capacity is limited, and pre-booking is advised to avoid disappointment.

Vote for the tree of the year