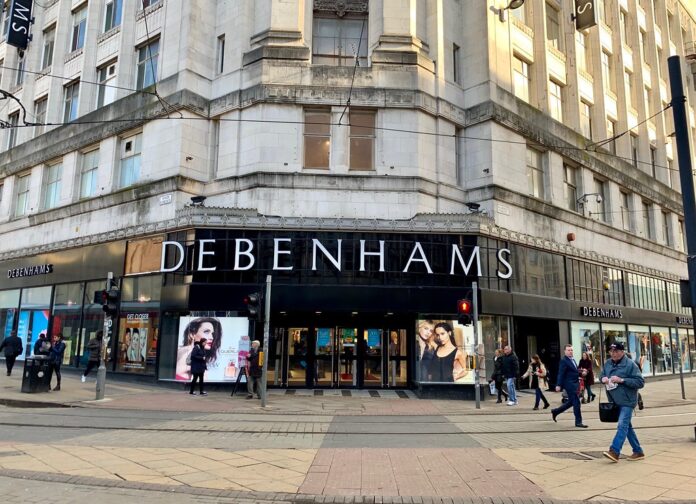 Britain’s department stores are facing an existential crisis thanks to the pandemic and rapidly changing shopping patterns.

SAVE Britain’s Heritage’s new report, Departing Stores: Emporia at Risk, says: “Department stores make up some of the finest and most socially significant buildings on British high streets. Designed to impress and inspire, they are of great architectural merit, and stand as a monument to the historic prosperity of their town.

They are deeply connected with personal histories, as places where generations of people have gathered, worked, even celebrated their weddings.”

In particular, the report sounds the klaxon for 18 which are at serious risk of being permanently lost – while celebrating a further 14 that have been rescued and given new life, demonstrating that viable uses can be found for these precious buildings.

The report says: “In a new era when large-scale retail is no longer sustainable, these fine structures are at risk of dilapidation or even demolition. And as these hubs of daily life are erased from the map, local communities feel increasingly disenfranchised. Protecting and reviving these buildings is not only a matter of preserving precious and distinctive architecture; it is an opportunity to restore a sense of place.”

At a time of climate emergency, it is also hard to justify the release of embodied carbon through the wrecking ball.

Marcus Binney, executive president of SAVE Britain’s Heritage, says: “London has Fortnums, Harrods and Selfridges but all over Britain, cities, towns, spas and seaside resorts boast handsome department stores built on proud corner sites or set prominently on high streets. Many were designed by local architects of note and founded by leading local families and all are destinations in themselves. Yet a decade of online shopping and Covid have brought an avalanche of closures. A race is now on to put life back into them. It’s a tough challenge but as Hattie Lloyd’s report shows there is hope too.”

Henrietta Billings, director of SAVE Britain’s Heritage says: “As our shopping habits change, so too can our landmark department stores. With imagination and determination, these historic ‘cathedrals of commerce’ can once again contribute to the life and vitality that our high streets are crying out for, while telling the rich and opulent history of over a century of commerce. Our campaign to save the M&S in Marble Arch, London has shown how vulnerable these buildings can be and how much public affection there is for them. The examples in this report where entrepreneurs and building owners have successfully reinvented these beautiful buildings show how adaptable they are.”

The pandemic accelerated a move away from high street shopping that was already well underway – with 30% of UK sales now online – causing the collapse of high-profile chains and leaving thousands of shops vacant and at risk.

The demise of Debenhams alone left a hole of 1.3 million sq m, with 90% of stores still empty a year later, while a fifth of former BHS outlets were vacant five years after its death. According to the British Retail Consortium and Local Data Company, there were 237 vacant department stores in the UK last summer.

Almost overnight, communities up and down the country face losing much-loved local landmarks to slow decay or, worse, demolition.

The report explains that business rates can incentivise landlords to let buildings decay, while recent planning deregulation has made it easier for empty shops to be turned into flats. While this could inject footfall into an area, experts also warn such change of use must support the “finely balanced eco-systems” of town centres, or risk creating “urban deserts”.

But there is hope. The report documents several much-loved department store buildings that have been rescued and given new life by far-sighted entrepreneurs – and even in some cases by Primark.

Andy Warhol once prophesied that “in the future, all department stores will become museums”. And, as SAVE points out, his prediction has already partly come true: Liverpool has twice staged an art festival in two of its old department stores. While in Bournemouth a former Debenhams, in a prominent brick and terracotta building overlooking the Pleasure Gardens, has reopened as Bobby’s, a retail and workspace hub with a restaurant and art gallery – and space for the local knitting circle.

Triple Whammy of Covid, flu and respiratory virus could push the NHS under this...