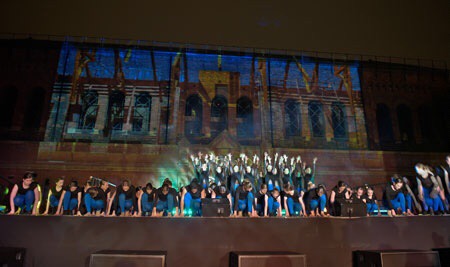 A NEW era opened for Ashton Old Baths on Saturday night when thousands of people witnessed a spectacular audio-visual event celebrating the conversion of the former pool into a 21st century business hub.

Henry Square was packed for the free 45-minute show called New Beginnings in which dance, music and digital graphics were merged to tell the story of the Victorian building.

The display, which was funded by the Heritage Lottery Fund and AGMA (Association of Greater Manchester Authorities), was produced by arts outreach group Stone Soup. It brought together almost 200 members of the borough’s many dance schools for an innovative routine choreographed by Stacey Maurice of Torque Dance Company.

Gas Music provided the thematic sound track – an original score comprising 11 pieces – and Steve Southern Associates was responsible for the digital programme which involved a series of images being projected on to the building.

A speech by the Civic Mayor of Tameside, Cllr Vincent Ricci, concluded proceedings.

Cllr Jim Fitzpatrick, Tameside Council’s First Deputy who has chaired the project board to renovate the building, said: “The celebration event was every bit as spectacular and successful as I expected it to be. The displays were breath-taking and it was wonderful to see so many families enjoying the free show.

“Bringing Ashton Old Baths back into use is a major achievement and I am very proud of the way in which the council has worked with partners including the Heritage Lottery Fund, Placefirst, AGMA, and the European Regional Development Agency to bring this magnificent building back to life.”

Ashton Old Baths was built in 1870 in Italianate style. It functioned as a swimming pool until 1975 and then lay derelict until 2013 when Tameside Council and Place First secured funding from the European Regional Development Fund and Heritage Lottery Fund to restore and renovate the building.